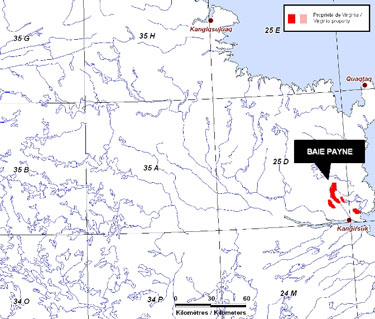 Ready or not, Nunavimmiut: here they come.

Thousands of mining companies have staked claims to explore the region’s riches in nickel, uranium and rare earth minerals.

And dozens of companies are actively exploring, as the residents of Kangirsuk have discovered.

Kangirsuk’s Saputik Landholding Corporation hosted a referendum Feb. 15 to ask local beneficiaries if they agreed to allow Quebec-based mining exploration company Virginia Mines to continue to prospect on Category 1 lands, set aside for each Nunavik Inuit community’s exclusive use by the James Bay and Northern Quebec Agreement.

In the Ungava Bay community of 550, beneficiaries voted 71 in favour and 69 against a three-year agreement with the mining company. That vote will still allow Virginia Mines to continue to explore for nickel on its 188-square kilometre Payne Bay property north of Kangirsuk.

Category 1 lands only make up about eight square km around the community. Most of the company’s prospecting activities happen on Category 2 lands, where Inuit retain exclusive hunting, fishing and trapping rights, although some activity touches on Category 1 lands.

While Kangirsuk residents have yet to approve a local nickel operation, Ningiuruvik said the referendum result reflects the community’s struggle to embrace the many mining projects destined for the region.

“People are concerned, but what can you do?” he said. “This has been happening in the region since the 1930s and 40s.”

“We’re starting to get to know mining and prospecting companies we’ve never even heard of before,” he said. “I think everything is going to open up in Nunavik.”

The agreement in place that has allowed Viriginia Mines to prospect on Category 1 lands isn’t new – it’s been in place since 2000, Ningiuruvik said.

But this is the first time the agreement was brought to beneficiaries and Ningiuruvik – who has only been with the landholding since 2008 — said the community probably wasn’t even aware they should have been consulted.

Virginia Mines, the Quebec City-based mining exploration company, has a 50 per cent share in the Payne Bay property alongside Anglo American, a United Kingdom-based mining company.

Virginia doesn’t have a camp in the region, but its prospectors use the community of Kangirsuk as a base to explore the area by snowmobile and helicopter.

In recent years, the company has mapped more than 40 sample areas or “surface showings” of nickel graded at 6.5 per cent.

But Ningiuruvik said it would be 10 to 15 years if and when any mining activity actually began.

“There are lots of negotiations to be done before they start,” he said. “We don’t want to be left out.

“There are going to be impacts, but we have a good opportunity for job creation through this. There are benefits to be made.”

The area around Kangirsuk is part of what geologists identify as the Trans-Hudson Orogen, a nickel-rich belt that stretches from Manitoba’s Thompson Belt and through Ontario’s Cape Smith Belt into northern Quebec.

Viriginia also has a handful of other claims in Nunavik; one further inland from the Hudson Bay coast, one inland of the Great Whale River and another in the Labrador Trough south of Kuujjuaq.

But Nunavik’s Ungava Bay coast is also home to iron ore desposits, where Oceanic Iron Ore has sunk millions into drilling at three sites between Kangirsuk and Aupaluk.

The iron deposits range from the Roberts Lake area north of Kangirsuk to the Morgan Lake area, about 50 kilometres from both villages, to Hopes Advance Bay in the south, where Oceanic plans to begin its operations. 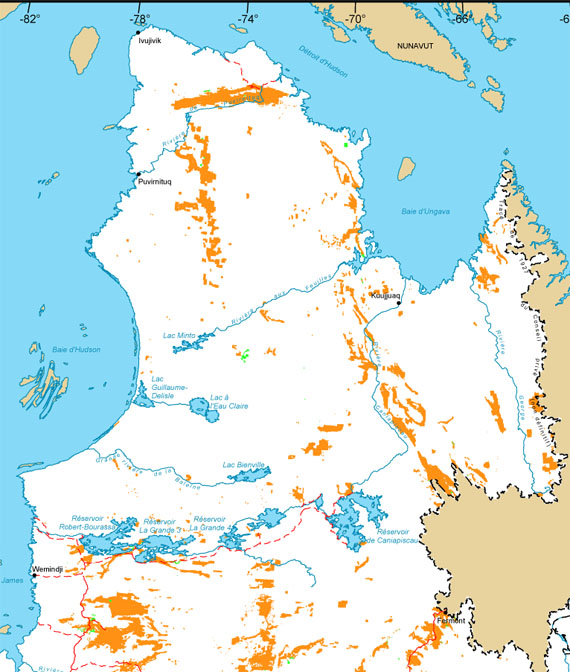 This map shows mining claims across Nunavik in orange, while green indicates where demands have been made for claims. (IMAGE COURTESY OF QUEBEC DEPT. OF NATURAL RESOURCES)