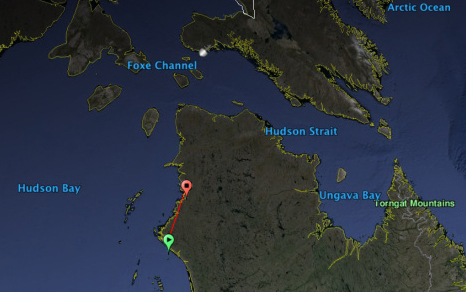 A group of doctors who work in Nunavik, along with a pilot, plan to kiteski from Puvirnituq to Inukjuak next week to raise money for a Nunavik cross-country ski program for youth. (GOOGLE MAPS IMAGE)

Most Arctic travellers hope for calm and clear weather to accompany their journeys over land and sea.

But a group of adventure seekers who plan to travel up Nunavik’s Hudson coast next week are hoping for wind to propel their journey.

That’s because the group is travelling by kite ski. Five Nunavik-based doctors and a pilot will leave Puvirnituq April 2 on a 230-kilometre trek to the neighbouring community of Inukjuak, including doctors Alex Lapointe, Mathieu Bohémier-Bernard, Ophélie Arlet, Barnett Schweiger, Gabriel Fortin and pilot Guy Chevalier.

The expedition is called Anurialuk, which means “strong wind” in Inuktitut.

“We’re giving ourselves two weeks, but it will really depend on the wind,” said Lapointe, a Quebec-based doctor who works in both Inukjuak and Puvirnituq.

“On days with more wind, we’ll advance a little faster; on calmer days, we’ll use cross-country skis to travel and pull our sleds.”

The group plans to follow the Hudson coastline, and camp in tents along the way.

What started off an expedition “just for fun” quickly turned into an opportunity to help young athletes in Nunavik.

Anurialuk’s kite-skiers are using the event to raise funds for Young Karibus. The cross-country ski program geared towards Nunavimmiut youth first launched in Kuujjuaq. Last year, the group skied from Kuujjuaq to Tasiujaq, inspiring a local chapter in that Ungava Bay community.

Now the Young Karibus are also based in two other communities: Kuujjuaraapik and Kangirsuk.

“We thought it would be nice to contribute something to the communities where we work,” Lapointe said.

So far, the group has amassed more than $2,000 in donations, including sponsorship from Air Inuit.

You can watch a video about the expedition here, and make your own donation to the Young Karibus project here.