Kivalliq hunters to get an additional bowhead this season 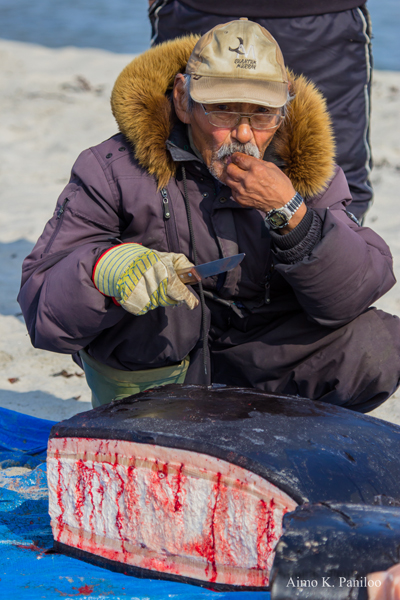 Hunters in the Kivalliq region will be able to take home an extra bowhead whale this season, now that the federal government has approved an increase to the total allowable harvest for the region.

The Department of Fisheries and Oceans said March 27 that it has okayed the Nunavut Wildlife Board’s decision to increase the bowhead whale harvest in the Kivalliq from one to two whales each year.

The decision to increase the bowhead quota in the Kivalliq follows a similar one in the Baffin, where hunters were also approved last fall to harvest two bowheads during the 2015 season.

In each region, wildlife boards argued that hunters in both the Kivalliq and Baffin had built up the capacity to handle a second whale harvest.

“It would greatly benefit the Kivalliq region, and the muktuk from the bowhead(s) would be distributed amongst the communities to ensure all beneficiaries carry on the traditional diet of consuming bowhead muktuk, which is now considered a rare delicacy,” read the Kivalliq Wildlife Board’s submission.

Inuit hunters groups also note that current research on the bowhead whale shows its population is stable and growing.

The Eastern Canada-Western Greenland bowhead population is estimated to comprise about 6,000 animals, according to the federal Department of Fisheries and Oceans.

The harvest is well within conservation management recommendations in the Kivalliq region, said a DFO news release March 27.

“The additional bowhead will benefit the Kivalliq region by supporting the traditional diet of beneficiaries and allowing the hunters and trappers organizations to further develop effective strategies for the utilization of the whale,” said the release.

The range of the Eastern Canada-West Greenland bowhead whale extends from the Canadian High Arctic to Hudson Bay and includes offshore West Greenland.

Hunters in the Kivalliq hope to have better luck this year than they did in 2014. Hunters in Chesterfield Inlet, the community which was granted the bowhead quota last year, spent almost two months pursuing a whale, without success.

In the Kitikmeot region last year, Kugaaruk harvesters took all but a few hours to land their bowhead in Pelly Bay.

And three days into their 2014 hunt, crews from Clyde River killed a 54-foot bowhead about two kilometres outside the Baffin community.