But service would rely on regional orgs, businesses as clientele 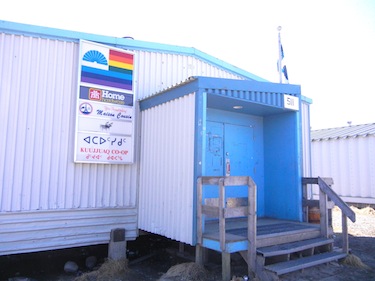 Since 2015, Nunavimmiut can no longer open an account, cash a cheque or make a deposit through the Nunavik Financial Services Co-operatives, once located in each of the region’s 14 co-ops. (FILE PHOTO)

KUUJJUAQ—If banking services are to return and thrive in Nunavik communities, regional organizations and businesses are going to have to support them.

That was the message to Kativik Regional Government councillors, who are meeting this week in Kuujjuaq.

The major factor in the closure of the Nunavik Financial Services Co-operative banking counters across the region last year was a lack of clientele—largely from the public and business sectors.

Typically, about 90 per cent of a bank’s revenues come from those sectors, Adel Yassa, head of the KRG’s department of regional and local development, told regional councillors Nov. 28.

But a much lower percentage banked with the Nunavik Financial Services Co-operative, operated by Quebec’s Desjardins credit union over the last decade in collaboration with the Fédération des coopératives du Nouveau-Québec (FCNQ.)

Desjardins closed the community banking counters in 2015, due to low usage of its services and the costs of its upkeep.

The co-operative banking service was running a deficit of about a half a million dollars a year, $3 million of that covered by the FCNQ.

When the banking services first launched in Nunavik in 2007, the plan assumed that regional groups would use those services.

“But they banked elsewhere,” Yassa said.

The original plan also counted on Desjardins and the FCNQ sharing the cost of employees’ salaries to staff the banking counters, although those costs fell largely to the co-op.

With its closure, Kuujjuaq is the only Nunavik community with access to in-person banking services, through its local CIBC branch.

Desjardins still counts about 3,000 accounts in the Nunavik region, although those customers are limited to online banking.

Now the KRG has been working to see how the region can return banking services to the community; directors met with FCNQ officials last month to decide how to move forward.

The absence of basic banking is being felt, both groups determined.

“I’m sure the organizations can be a part of this. Many people in Nunavik don’t have an account, and it’s a need, especially when they receive money from the government.”

Nunavik’s leadership agrees: The region needs not only reliable, Inuktitut-language banking services accessible to its 14 communities.

But Nunavik organizations plan to gauge banking needs in the region before they decide how to move forward, Yassa said.

The KRG says it will help fund a technical study in 2017, alongside the FCNQ, contracted to the Canadian Banking Association.