“I have yet to receive a response” 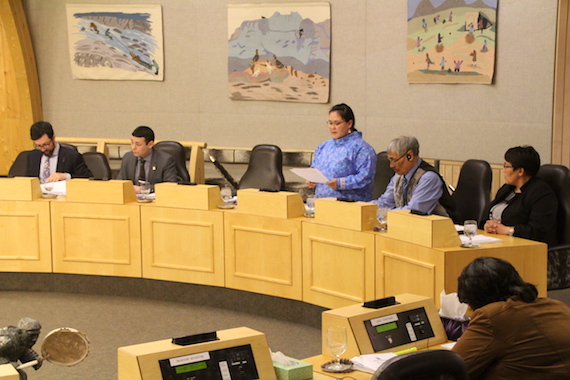 Kugluktuk MLA Mila Kamingoak says she is frustrated with the Government of Nunavut’s lack of support for a hamlet plan to build an elder-care facility in her community of about 1,500. (FILE PHOTO)

Kugluktuk MLA Mila Kamingoak is not ready to abandon her community’s aim to build a long-term care facility for elders.

Nor is she overlooking the lack of response to a letter that she gave Nunavut’s premier, Paul Quassa, last April.

Kamingoak learned during this sitting of the legislature that the Government of Nunavut plans to issue a request for proposals for building and running facilities that would provide care to the territory’s growing number of elders.

For now, many of these elders, especially those who are bedridden or who suffer from serious conditions like dementia, end up in Ottawa when they need a high level of continuous care.

On Tuesday, May 29, Kamingoak rose again in the legislature to deliver a member’s statement about the GN’s decision not to support Kugluktuk’s proposal.

“I rise today to express my frustration at the lack of initiative on the part of our government to support a homegrown solution to a very real and urgent issue faced by the residents and community of Kugluktuk,” she said.

It is frustrating “when on the one hand, our government urges Nunavummiut to learn to be self-sufficient and to work together to find our own solutions, but on the other hand will not commit to providing the necessary support,” Kamingoak said.

Later the MLA directed questions to the premier, who is also the minister responsible for seniors in Nunavut.

Kamingoak said she sent a letter to Quassa in early April to ask for his support for the Hamlet of Kugluktuk’s proposal to build its continuing long-term care facility.

“I have yet to receive a response,” she said. “Can the minister confirm whether he received my letter and, if so, when he plans to respond?”

Quassa said he didn’t “exactly remember the letter, if I have seen the letter or not. “

“I don’t think I have seen it. I have not seen the letter. I don’t remember how I received it,” he said.

Kamingoak later tabled a copy of the letter in the legislature.