Three-quarters of respondents were victims of violence 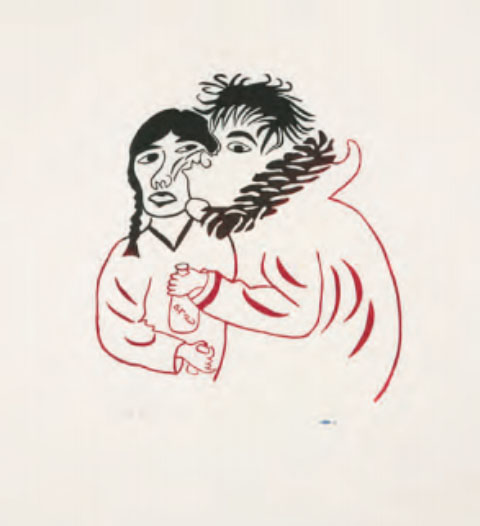 In a new study looking at challenges facing Nunavimmiut women, 74 per cent of respondents report having experienced violence at home. Alcohol abuse is often behind that, as detailed in this print called Imialuk, by Tivi Illitsituk. (IMAGE COURTESY OF AVATAQ CULTURAL INSTITUTE)

Nunavik women are at the heart of their families and communities, but that comes with a number of challenges, they say.

A new report on the life and concerns of Nunavimmiut women shows that they consider the housing shortage, domestic violence, substance abuse and shortfalls inthe education and justice systems in Nunavik serious threats to the well-being of Inuit in the region — and to women’s capacity to achieve equality with men.

“Bring Hope and Restore Peace,” prepared by Saturviit Inuit Women of Nunavik, with assistance from researchers at Quebec City’s Université Laval, reveals that a shortage of safe and affordable housing ranks among the biggest barriers to well-being in Nunavik, which is short an estimated 900 social housing units.

Thirty per cent of women respondents said they lived in overcrowded homes, which put them at a greater risk of suffering from alcohol abuse, violence, sexual abuse and depression.

The report captures the stories of 108 different woman, 18 to 85 years old, from seven different Nunavik communities.

The respondents said that crowded living conditions make it difficult to provide a good environment for raising and educating children. Almost 90 per cent of respondents were mothers.

They said a lack of housing options forces many women to stay in abusive relationships, and that the handful of women’s shelters in the region don’t offer a viable solution to most women.

Violence is a pervasive issue: 74 per cent of respondents said they have experienced violence at home, while 46 per cent said they had been sexually assaulted.

That abuse was often driven by alcohol. According to those who participated in the study, the high rate of alcohol abuse in Nunavik is directly connected to the general suffering inherited from the traumatic events of colonization.

The survey participants are living proof: 39 per cent identified themselves as recovered alcoholics; 10 per cent considered themselves heavy drinkers.

But women do not, for the most part, believe that banning alcohol will help prevent its abuse in Nunavik, noting that therapy, education and prevention would serve the region better.

“Having a bar in the community is sometime seen as a good way to provide a permanent and controlled place that is meant for drinking and partying,” the report said, “in order to protect children from negative role models and violence at home.”

Little faith is placed in the justice system, women noted in the report, because it is largely managed by non-Inuit.

Nunavimmiut women who have been victims of crime are often reluctant to press charges against an assailant because they’ll continue to be in his presence — either at home or in the community — through the length of the proceedings, which could go on for years.

But they say the introduction of justice committees at the community level has allowed Inuit to help other Inuit through a reconciliation process.

And those social bonds are critical, women say.

“I remember in the past when couples were torn by violence or arguments, the parents or some leaders would talk to them and give advice to those couples,” said a 67-year-old respondent. “But nowadays, we are not doing that. Nobody is giving advice to couples who are in trouble or who need help.”

“Bring Hope and Restore Peace” also highlights deficiencies in the education system which result in high drop-out rates among Nunavimmiut youth, and lack of post-secondary aspirations.

Forty per cent of women who took part in the survey were high school graduates, and just 10 had post-secondary degrees.

Thirty-eight per cent of respondents were not working at the time they were surveyed; 31 per cent said they were struggling financially.

“Giving Nunavimmiut access to an appropriate education system is essential to addressing all social issues because it is the chief means to foster hope, pride, awareness and confidence in their ability and future,” the report said.

“Education is indispensable for the youth to move forward, to control their destiny and to become independent.”

In the report’s conclusion, Nunavimmiut women say that restoring peace in Nunavik communities is a collective responsibility, calling on all levels of government and Inuit leadership to deliver support to the region which respects the Inuit worldview.

“It is everyone’s duty to protect and support each coming generation at its own level,” the report reads.

Nunavimmiut women say more communication and more resources are necessary for reducing the gap in services between the North and South, and also to guarantee women’s equality with men.

You can read the full report here.