“We’ve had to make difficult decisions” 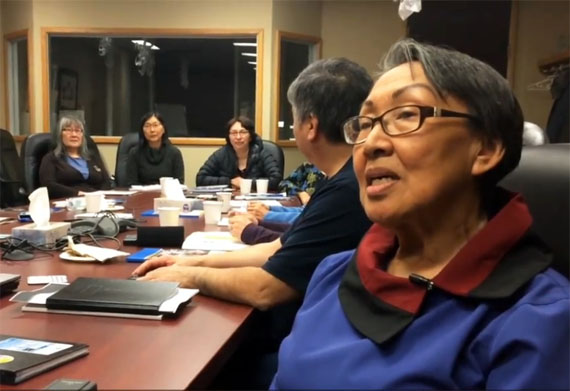 The national Inuit group working to come up with a standardized model for written Inuktut has agreed on a draft syllabus it plans to submit to Inuit Tapiriit Kanatami in mid-2018.

ITK established the Atausiq Inuktut Titirausiq task force in 2012 to create a unified writing system for all Inuktut dialects.

Six years later, the group has opted to migrate away from syllabics to Roman orthography, as it puts the final touches on its recommended spelling and common terminology.

“This is the first time a writing system is being developed by the Inuit, for the Inuit,” said ITK’s national Inuit language coordinator Monica Ittusardjuat.

“There’ll be more unity amongst Inuit from different regions. It’s for the betterment of education and to share resources.”

But the group’s efforts have made for a long, difficult and often divisive process, she said.

The further the geographic distance between Inuit regions, the larger the gap between dialects and the bigger the challenge it’s been to find middle ground, Ittusardjuaq said.

The eight-member task force agreed on the syllabus at its last November meeting in Inuvik; the group met again Jan. 9 to Jan. 12 to go over its orthography chart, grammar and spelling rules.

The draft writing system includes an alphabet, which spells out the sounds i, u, a Ittusardjuat offered as an example, and ti, tu, ta.

“The difference is that some dialects, like Inuvialuktun and Innuinaqtun, use the y, so we agreed to the j instead,” she said.

“But they can pronounce it as a y if the word does not have another consonant (as in iji).”

Another example: Nunatsiavut Inuttut has always used a capital K for the uvular sound, while Nunavut Inuktitut relies on q. After some debate, the group agreed to migrate to the q.

In Nunavut, where Inuktitut speakers use the ampersand or the ɬi ɬu ɬa for alveolar consonants, AIT has opted to change the symbol to tl.

“The group had decided that it makes the symbol simple, teachable and that it has to be on the keyboard,” Ittusardjuat said.

The group also agreed to use ts to represent the ch sound used by Inuvialuit and even by Cape Dorset residents, as in natsiq.

Another recommendation AIT plans to make is to use the jj consonant cluster rather than the tdj used in the Inuvialuit region.

“In this meeting, it was suggested that the common terminology be based on Kivalliq dialects or North Baffin to ensure traditional roots are not lost,” Ittusardjuaq said, “and the contrast in pronunciation between pt/tt that exists in these dialects is preserved in the spelling.”

But the group has yet to reach agreement there—a common hurdle AIT members have faced from the get-go.

“They don’t want to favour one dialect over another,” Ittusardjuaq said. “They’ve been saying right from the beginning that they’ll respect all dialects. And we’re not out to change any dialect, they’re just trying to unify the writing system so different regions can communicate with each other.

“We’ve had to make difficult decisions,” she said. “It’s hard. People are frustrated.”

Although AIT has forged ahead with Roman orthography, there is opposition to that in both Nunavik and Nunavut, where an older generation learned to read and write with syllabics.

That’s made this whole process particularly difficult for elders in those regions, Ittusardjuat said, who feel like they’re losing a part of their identity.

For that reason, the group has recommended that syllabics continue to be taught at the secondary level.

There’s still time for Inuit to provide their own input, by contacting any of the task force members or writing directly to Ittusardjuat at ittusardjuat@itk.ca.

AIT will meet next in March in Kuujjuaq, while Ittusardjuat plans to host consultations in 10 more communities before the group’s draft is submitted to ITK in June.

A finalized document will go to ITK’s annual general meeting in August.