Larga Baffin: a place for those who can’t come home for Christmas 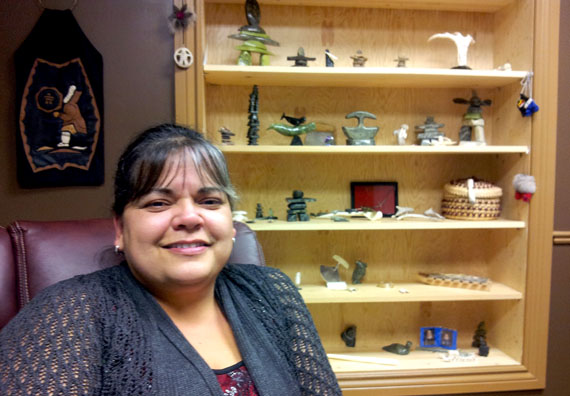 Trudy Metcalfe-Coe, the executive director of the Larga Baffin patient home in Ottawa: “In some way, shape, or form, we’ve touched every family in the North.” (PHOTO BY BRIELLE MORGAN)

Joanna Innualuk-Kunnuk joins a long line of people at the Tim Horton’s counter inside the Ottawa airport.

She’s flying home to Pond Inlet for Christmas, and she says that makes her one of the lucky ones.

Just yesterday, Innualuk-Kunnuk was piecing together her fourth consecutive jigsaw puzzle in the common room at Larga Baffin. It’s a place for people from the Baffin region to stay when they have to go south for medical treatment.

But almost any Northener can tell you that, says executive director Trudy Metcalfe-Coe.

“In some way, shape, or form, we’ve touched every family in the North.”

She realized the extent of their impact while on the Jordin Tootoo tour this past June.

While the NHL star was a smash hit with locals, Metcalfe-Coe was consistently humbled by the warm reception she received in town after town. Many had stayed at Larga Baffin before, or were close to someone who had.

“It was amazing… the line-ups just to say, ‘Hi… thank you.’ I was told a number of times to stop making people cry,” she said.

Since the Larga chain expanded to Ottawa in 2000, Metcalfe-Coe has come to know thousands of patients and the family members or friends who escort them. Art work fills the walls and shelves in her office — a stone carving from a young man with cancer, inuksuit made by children.

“We are very involved with our residents. They’re not just people coming through our doors, they’re people that we live with. We see them every day, we talk with them – they’re a part of us,” she said.

It’s these connections that make the job feel, well, not like a job, Metcalfe-Coe says.

With a background in tourism and hospitality, playing host comes naturally to the Nunatsiavut native. She knows dealing with medical issues so far from home can be tough for patients, especially over the holidays.

While some – like Innualuk-Kunnuk – are able to go home for Christmas, Metcalfe-Coe said they’ll likely host about 26 people over the holiday. Some are midway through cancer treatments, while others have children in the hospital.

Staff members do what they can to make things festive, sporting colorful antlers from the Dollar Store.

“We do Christmas dinner… Santa comes. Santa also brings things for people who are in hospitals. We’ll make every effort we can to get day passes for them, so they can be here for Christmas Day – even it it’s only for a few hours,” Metcalfe-Coe says.

Sarah Alooloo and her daughter Rhona will spend Christmas at Larga.

And while this isn’t their first stay at the residence, it’s the first time they will spend Christmas away from their home in Arctic Bay.

Several residents say being down South around Christmas has at least one perk – the shopping.

While she’s eager to get back home to her grandchildren, fellow Larga resident William Qamukaq is waiting to find out whether he’s well enough to head home to Igloolik.

“I’m okay with whether I’m staying or going… they’re accommodating and there’s no restriction with movement, so I’m happy,” he says.

Meanwhile, Rosie Lawson hopes she won’t have to spend another Christmas, away from Pangnirtung. She spent one at Larga already, four or five years ago.

“We were homesick, but we had no choice,” she says.

While residents like Lawson come to terms with the idea of a southern Christmas, staff members struggle with the ongoing need for more space.

Larga Baffin has endured multiple expansions over the years. Since 2000, the number of beds has almost quadrupled.

Still, more often than not, staff members are on the phone with hotels trying to nail down extra beds because they’re over capacity.

Another expansion is needed, but Metcalfe-Coe says it will likely be a year or two down the road.

“It’s just not something that can happen overnight.”