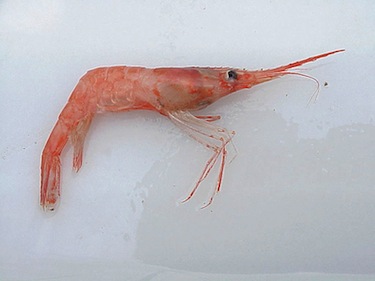 An example of pandalus borealis, or northern shrimp, one of the shrimp species harvested off Nunavut waters. (FILE PHOTO)

There’s a danger that Nunavut’s already inadequate share of offshore shrimp quota could get even smaller if the Department of Fisheries and Oceans continues to apply its last in, first out approach to allocating shrimp quotas, Nunavut Senator Dennis Patterson said last week.

Patterson issued the warning in a June 17 statement in the Senate.

“All Nunavut asks for is to be treated fairly and to have the terms of their constitutionally protected Nunavut land claim respected,” Patterson said.

Patterson’s contribution to the campaign comes at a time when various entrenched interests, especially long-established fishing fleets in Nova Scotia, are fighting to hold on to their total allowable catch in the face of shrimp stocks that are declining because of climate change.

“Last-in, first-out,” or “LIFO,” is a federal policy that’s been applied to the northern shrimp fishery since at least 1997.

Under that policy, fishing fleets who first developed a given shrimp harvesting area — such as companies in Nova Scotia — would be the last to suffer quota reductions.

At the same time, the newest entrants — such as those from Nunavut and Labrador in the case of northern regions — would be the first to experience quota cuts.

And that, Patterson said, poses a potential threat to Nunavut’s desire for a larger share of shrimp quota in its adjacent waters.

Right now, Nunavut interests hold only about 38 per cent of the total allowable shrimp catch adjacent to Nunavut waters — because federal policy favours the older established companies from the South that have been harvesting shrimp off Nunavut and Labrador for decades.

At the same time, the federal government has never consulted the Nunavut Wildlife Management Board on its application of the “LIFO” policy, even though it’s required to do so, Patterson said.

“Government recognizes the importance of the principles of adjacency and economic dependence of communities in the Nunavut Settlement Area on marine resources, and shall give special consideration to these factors when allocating commercial fishing licences,” the land claim agreement says in Article 15.

A federal panel charged with performing an “external review” of the issue is expected soon to report to Dominic Leblanc, the federal fisheries minister, who will make a decision on the issue.

Nova Scotia interests are firmly opposed to any change in LIFO and have mounted a loud lobbying campaign aimed at protecting their financial interests.

Groups in Nunavut and Newfoundland-Labrador, however, support the modification of LIFO to protect the interests of newer entrants.

The Qikiqtaaluk Corp., in a submission to the ministerial panel, says the policy should be modified to respect the Nunavut Land Claims Agreement.

“A one-size-fits-all approach does not work in all areas and as such QC is recommending a balanced approach where each of the principles of adjacency, historical attachment, economic dependence and Land Claim provisions are considered by the minister,” the QC submission said.

And the Baffin Fisheries Coalition said in its submission that the coalition remains “a strong proponent of the adjacency principal, and supports those who have legitimate claim to natural resources in their established territories.”

In 2013-14, the total market value of Nunavut’s fisheries, including shrimp, was worth about $86 million and employed about 370 seasonal workers.

Patterson ended his statement by saying he hopes Leblanc will consult the Nunavut Wildlife Management Board before making his shrimp allocation decisions next month.