Learjet promised for western Nunavut medevacs is now up for sale 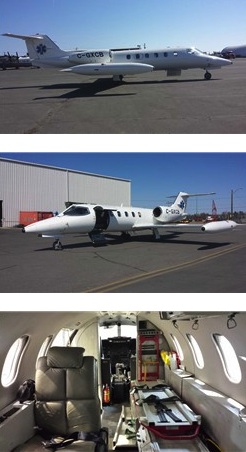 This Learjet — which was supposed to be used for medevacs in western Nunavut, is now on the market. ( PHOTOS FROM MOBILE. GLOBALAIR.COM)

If you were waiting to see the Learjet 35A that was supposed to handle air ambulance services from the Kitikmeot region, you’ll have to travel to Alabama first.

The aircraft is now up for sale — and, according to information posted on an online aircraft site, mobile.globalair.com, the 1981 Learjet 35A can be found in the southern United States.

The Learjet is not based in western Nunavut, as initially promised by Aqsaqniq Airways Ltd., which obtained the air ambulance Government of Nunavut contract for the Kitikmeot region in 2011.

The jet, worth about $1 million, is white, with a paramedic logo on its tail and a medevac interior with three seats — but that’s as close as anyone in the Kitikmeot region will get to the aircraft.

But why no jet for medevacs? Because the air ambulance contract with the GN has been modified, Nunatsiaq News has learned.

Since Aqsaqniq obtained the air ambulance contract, previously been held by Cambridge Bay-based Adlair Aviation Ltd., all flight operations for that contract have been conducted by Yellowknife-based Air Tindi Ltd., a subsidiary of Discovery Air and Aqsaqniq’s 49-per-cent joint venture partner for the $30-million, five-year medevac contract.

That contract said a Learjet 35A was supposed to be based in Cambridge Bay — but the aircraft was rarely seen there.

The lack of a Learjet continues to upset Cambridge Bay resident Leonard Epilon, whose common-law wife, Betty Atighioyak, 32, of Cambridge Bay died in December 2011 after a slow medevac flight to Edmonton.

A jet would have cut the time for air travel to Edmonton, 1,970 kilometres away from Cambridge Bay, down to two hours — and yet Atighioyak’s trip took more than double that time on a King Air 200.

Atighiogak’s medevac was one of the first operated by Aqsaqniq, which took over from Adlair on Dec. 1, 2011.

Adlair’s medevac-equipped Learjet 25B remains in Cambridge Bay, but is no longer used for air ambulance services.

According to a 2011 briefing note from the GN’s department of Health and Social Services on the Kitikmeot medevac contract, obtained in 2014 by Nunatsiaq News, the medevac provider — Aqsaqniq — had agreed to “have a dedicated Lear Jet 35A with a gravel kit and STOL (short take off and landing) kit installed which will allow them to access all communities in the Kitikmeot by jet [from Cambridge Bay]. A back-up King Air 200 will be located in Yellowknife.”

Now Tindi, the contract’s operator, doesn’t have to keep a Learjet in Cambridge Bay: the renegotiated contract says King Airs may now be used for all medevacs.

Nunatsiaq News has requested comment on the changes to the medevac contract and aircraft slated for medevacs from Tindi, but has not yet heard back from them.