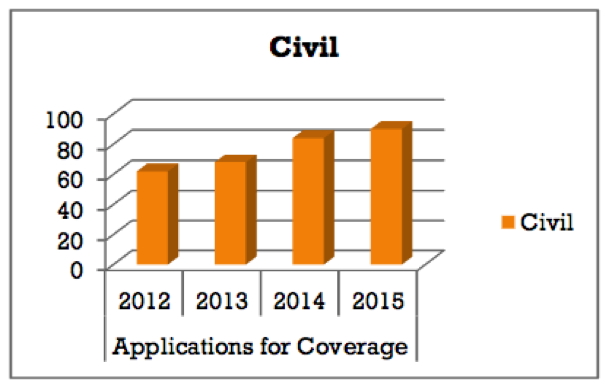 This graph from the Legal Services Board’s 2014-15 annual report shows the growth in legal aid applications in Nunavut for civil matters.

The Legal Services Board of Nunavut, which annually provides legal aid services to more than 90 per cent of all Nunavummiut who appear in criminal, civil and family court, are hiring more and more private lawyers to provide legal aid services.

That’s according to new data released April 20 by Statistics Canada on legal aid services from across the country.

According to StatsCan, the number of lawyers staffed in Nunavut by the Legal Services Board has hovered around 20 for the last four fiscal years ending in March 2015.

But the number of private lawyers whose services are contracted by the board has more than doubled during that period from 11 to 27, the StatsCan study said.

According to the legal board’s annual report for 2014-15, tabled last month in the legislature, for the second year in a row, legal aid lawyers represented about 98 per cent of all Nunavummiut appearing in criminal court.

The report said legal aid was provided to 292 individuals facing criminal charges, a slight decrease from the previous year.

Applications for legal aid in family court increased slightly in 2014-15 compared to the previous year, the report said, up to 185.

“There is a steady… need for services in the areas of residential tenancy, employment law, poverty related issues, human rights, in addition to police misconduct matters,” the report said.

According to the StatsCan report, 573 Nunavummiut applied for legal aid in 2014-15, 565 of which were approved.

That’s compared to 576 applications in the previous year, 520 of which were approved, according to StatsCan.

The chair of the Legal Services Board, Iqaluit mayor Madeleine Redfern, said in the 2014-15 annual report that the board is “extremely pleased” with the Nunavut government’s announcement earlier this year to relaunch its home grown law program in September 2017.

“LSB is one of the main employers of lawyers in the territory and it is only with such law school programs [that] LSB can be able to significantly increase the number of Inuit lawyers and legal professionals within its organization,” Redfern said.

The legal board posted a surplus of about $1.2-million in 2014-15, the board’s annual report said, mostly due to a few unfilled jobs.

The board’s $11.8-million budget for 2014-15, to provide legal aid clinics in all three Nunavut regions, comes from the Government of Nunavut.

According to the new StatsCan report, $1.5-million of that money comes directly from the federal government.