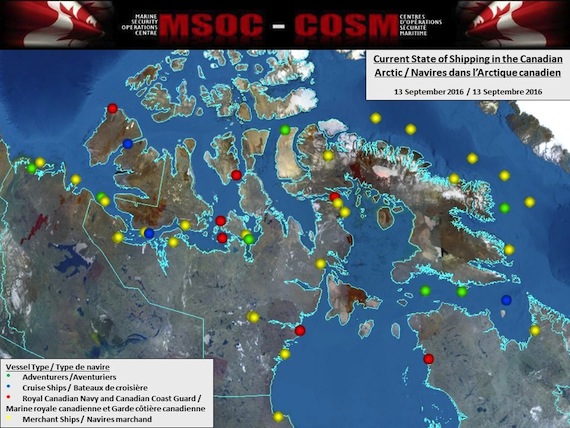 This map from the Marine Security Operations Centre shows what kind of marine traffic you could find Sept. 13 in the Arctic. (IMAGE FROM THE MSOC) Members of the Canadian Coast Guard Auxiliary, which is active in Cambridge Bay, would like to see more training and drills in how to use spill emergency response equipment. (PHOTO BY JANE GEORGE)

CAMBRIDGE BAY—Canada wants to improve marine security and safety in the Arctic, as the region’s sea ice cover drops to one of the lowest in 35 years, and a recent study forecasts a big opening of the Northwest Passage for shipping.

The measures to improve security and safety include a best-practice guide for cruise ships travelling in Canada’s Arctic waters as well a probable tightening of regulations for smaller vessels travelling in the Northwest Passage.

To get input from northerners about their concerns, officials from the Department of Fisheries and Oceans, the Canadian Coast Guard and Transport Canada have held meetings in Yellowknife and Cambridge Bay with partners in the territorial governments, organizations, industry, science and the communities—and there’s another similar, invitation-only gathering planned for Sept. 15. in Iqaluit.

For now, the get-togethers are referred to as “engagements”—but the federal government is listening to what people have to say.

And many at the two meetings raised the shortfalls of current regulations on Arctic shipping, which are overseen by Transport Canada, because these only apply to ships of 300 gross tonnes or more.

Participants suggested more regulations for smaller adventure boats like Eagles Quest II which recently called in the Coast Guard for help as they headed into the Northwest Passage.

“We have these adventure tourists guys, and they create concerns in the community,” said Desmond Raymond, the regional director of Marine Safety and Security for Prairie and Northern Region at Transport Canada, who also attended the Cambridge Bay meeting. “We’re taking that back. That came through loud and clear.”

Raymond said Transport Canada plans to look hard at what the various options, such as new regulations or new reporting requirements, could be.

As for cruise ships, Raymond expects to see a regular—not steep—increase in cruise ships in the Arctic, “but for folks up north, you see one, and then you see three—that’s a significant increase.”

So the DFO, Coast Guard, Transport Canada and other partners plan to look at better managing cruise ship traffic, with a new working group that will also include the Association of Arctic Expedition Cruise Operators, an international association for expedition cruise operators operating in the Arctic.

The committee which look over a new set of guidelines for cruise ships, which will reflect “multiple aspects of the Crystal Serenity operation,” praised by Raymond, and promote best practices.

A debrief on the Crystal Serenity, which made three land calls in Canada—in Uluhaktok, Cambridge Bay and Pond Inlet—will also take place this autumn.

The guidelines for cruise ships should be ready for the 2017 season.

Among the other takeaways from the Aug. 31 meeting in Cambridge Bay, which included representatives from western Nunavut communities and their hunters and trappers associations: a need for more Coast Guard training, drills on how to employ the 22 emergency spill response caches around the North, and improved communications.

“A lot of the time there are pretty simple solutions to complex problems,” said Robert Brooks, the DFO’s director of Economic Industry Intelligence, who spoke to Nunatsiaq News about the meeting.

An online portal already exists where people share their ideas and to see what others are saying on marine safety and security and in the future a possible Facebook page could help improve communication, he said.