Less snow, more evaporation, may be drying up northern lakes

“It’s certain that the ecological consequences will be significant” 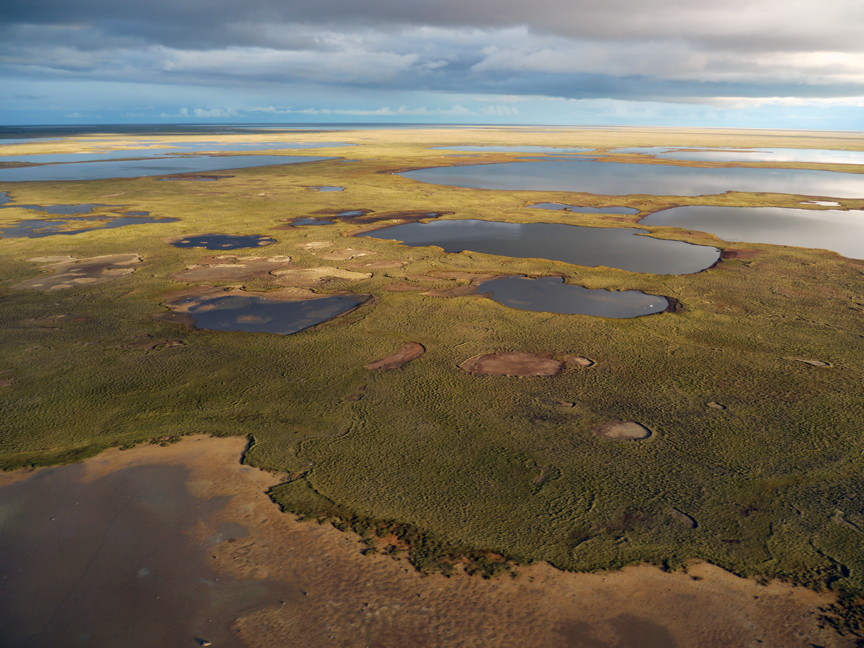 Researchers believe tundra lakes such as these, in the Dewey Soper Bird Sanctuary, west of Nettilling Lake in southwestern Baffin Island, are drying up with dire consequences for plants and wildlife which rely on the water for survival. (PHOTO BY REINHARD PIENITZ)

Lakes in sub-Arctic Canada are drying up at a rate “not seen in 200 years.”

That’s the message from a study released Nov. 27 by researchers from a consortium of Canadian universities.

Eleven researchers from the universities of Laval, Laurier, Brock, and Waterloo concluded that because of less snowfall in subarctic areas and longer ice-free seasons, lakes are drying up fast.

“The problem stems chiefly from a decline in melt water; for instance, from 2010 to 2012, average winter precipitation in Churchill decreased by 76 mm compared to the averages recorded from 1971 to 2000,” read a Nov. 27 press release from Université Laval.

Although results from that lake have not come back yet, lead researcher for the study Frédéric Bouchard said it looks similar to results found in northern Manitoba and the Yukon.

“Likely we could observe, in the near future, desiccation of shallow tundra lakes at several places in the Canadian Arctic and the subarctic in Nunavut,” Bouchard told Nunatsiaq News

“You have less snow and more chances to have evaporation. For the lakes, these two kinds of things have more negative water balances,” he said.

That means less water in the lakes — which also spells trouble for Nunavut’s ecosystem.

“So, if you have some shallow lake that disappears, it’s not a good thing for the wildlife and vegetation that rely on these aquatic landscapes,” he said.

Bouchard and his team came to their results by sampling sediment at the bottom of lakes.

“Isotopic analyses conducted on the remains of phytoplankton accumulated in lakebed sediment show that the lakes have maintained water balance for 200 years,” the press release said.

But this water balance was unexpectedly thrown off course “a few years ago.”

Bouchard said the next step is to go further down into the sediment to see thousands of years back in time to analyze whether these results are unprecedented on a larger scale.

For now, Bouchard said the results, based on the last 200 years, are “worrisome.”

And the research says that if trends of dry summers and less snowy winters continue, some of the subarctic lakes could “dry out completely.”

“It’s difficult to predict all the repercussions of this habitat loss, but it’s certain that the ecological consequences will be significant,” Bouchard said.

Recent data from the Colorado-based National Snow and Ice Data Center has shown that sea ice cover in the Arctic remains among the lowest in more than three decades.