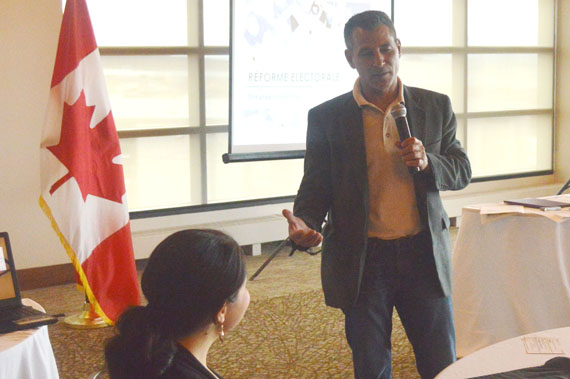 Hunter Tootoo, the independent MP for Nunavut, talks to Maryam Monsef, the federal minister of democratic institutions, at a town hall meeting in Iqaluit Aug. 29. (PHOTO BY STEVE DUCHARME)

Monsef’s cross-Canada tour is the first stage in the reform process, to be followed by a round of consultations by a special committee on electoral reform, intended to carry out an election promise that Prime Minister Justin Trudeau made last October.

The special committee’s mandate is to find an alternative to the current first-past-the-post system for electing MPs, such as transferable ballots or a form of proportional representation.

The idea for reform came about because of longstanding public complaints that the number of seats political parties end up winning in the House of Commons often do not reflect their share of the popular vote across the country.

The committee will also gauge support for mandatory voting and online voting.

“The purpose of these consultations is to hear from everyday Canadians how any reform will affect them, or the people in their communities,” Monsef told Nunatsiaq News at the conclusion of her public workshop in Iqaluit’s Frobisher Inn.

“We heard from Canadians in the election that they want us to listen to them first and hear their realities before implementing any legislation and that’s what these town halls are all about, hearing those challenges and opportunities.”

But the meager 15-or-so attendees at the morning consultation caught the minister flat-footed at her only Nunavut appearance.

“It was another one of the attendees that actually told me half-an-hour before this morning that this was happening,” Redfern told Monsef.

“These events need to happen in the evening when people are not at work.”

None of the prepared brochures for the engagement were supplied in Inuktitut and no Inuktitut interpreter was provided, although translation was available in French.

“I’ll be sure to share this feedback, specifically about translation, specifically about the importance of an evening event and increased noticed [to the special committee on electoral reform] so that when they come here they can learn from some of the way that we could have done better,” Monsef replied.

Nunavut MP Hunter Tootoo, making a rare public appearance after an affair with a staffer cost him his seat in Trudeau’s cabinet and with the Liberal caucus, was the target of several open-ended questions on accountability and legitimacy of elected officials.

“We vote once every four or so years for an MP… There’s no mechanism in place to recall MPs if that MP is underperforming in the view of a percentage of the citizens. Legitimacy has to be something that should be ongoing between elections and not just every four years,” said attendee Joey Murdoch-Flowers.

Tootoo said after the event that criticism comes with the job.

Monsef’s office informed Nunatsiaq News, prior to the town hall, that the minister would not field any questions on Tootoo’s ouster from cabinet and the Liberal caucus.

Tootoo said the electoral reform process is an opportunity for Nunavut to gain more representation in Ottawa and that he looks forward to attending the special committee consultations scheduled this fall.

“This is a starting point,” he said, adding “we need to be brought into this new age to be able to participate, have the opportunity to participate at the same level that other Canadians enjoy.”

While the proposed reforms have yet to take shape, Conservative MPs in Ottawa are already demanding a national referendum ahead of any changes to the Canada Elections Act.

“We have a tradition [in Nunavut] of democratic participation in major decisions and I hope that the issue of consultation with the general public, not just with the MPs and senators… will include some way of canvassing the citizens of Canada before some decision is made,” Patterson told Monsef.

“I think the conventions in the North point to that direction.”

Monsef continues her northern electoral reform tour with a visit to Yellowknife Aug. 30, followed by consultations in Whitehorse the next day.

Monsef will visit every province and territory at least once before her tour concludes in Newfoundland and Labrador, Oct. 1.

The electoral reform standing committee’s tour date has yet to be released, but should begin in the coming weeks and into the fall, Monsef said.