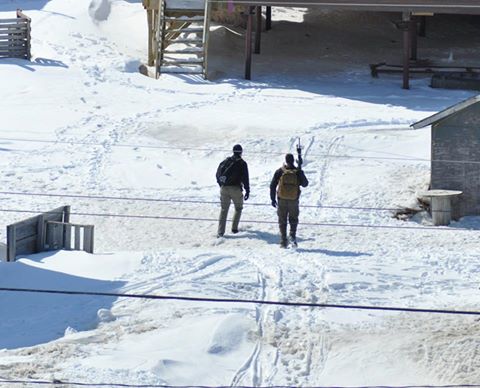 Behind the barricade: members of the RCMP walk around Happy Valley at about 1 p.m. April 29. The armed standoff, which began during the afternoon of April 28, continues as of 1:30 p.m. and all public access by road to the Iqaluit neighbourhood has now been blocked off. (PHOTO BY THOMAS ROHNER) On April 29, Roger Bélanger, his wife and son, six, were among the many residents still behind the barricades in Iqaluit’s Happy Valley neighbourhood, which has been under a lockdown since April 28. Bélanger lives close to the house where police engaged in an armed stand-off with a distraught young man. (PHOTO BY JANE GEORGE)

Living behind the barricades and under lockdown in Iqaluit April 29: that’s where Roger Bélanger, his wife, and their six-year-old son are spending the day at their home in Happy Valley.

His house, 1661, lies right behind the house where the standoff, which started during the afternoon of April 28, is now underway.

That area has been under a lockdown, with barricades blocking all traffic in and out of the neighbourhood.

He said he knew exactly what time it was because his son gets off the bus at 3:40 and when he heard the police, he looked at the clock.

Police told Bélanger he could get his son inside.

“God is good. If I hadn’t been able to get him, who knows where he would have been spending the night,” Bélanger said.

But there were already five other children in the house, all under five, who attend the some daycare operated by his wife — the Bélangers received a call later from the police saying they would try to evacuate the children.

Bélanger said he was already worried about what would happen if the children did have to stay the night with them, and he was thinking about where they would all sleep — but then, shortly before 7 p.m., he got word the RCMP would bring the children out.

Six officers, one per child, came over, carrying the children over a snowmobile path to the road on the other side.

Two of the younger ones were scared when the RCMP officers took them and started to cry, but Bélanger comforted them, saying, “don’t worry, they’re taking you to see Daddy and Mommy.”

“When you’re really involved in this kind of thing, it’s something,” Bélanger said of the experience.

The children were reunited with their parents at Joamie Elementary School, he said.

Then, at 10 p.m., Bélanger heard and saw two large bangs from near the neighbouring house where the incident was unfolding — an exchange of gunfire.

“Boom! I heard, and then I saw a big flash,” he said — confirming what others have said, that they heard gunfire at that hour from Happy Valley.

Bélanger said he woke up several times during the night and saw to his dismay, that the police were still there.

Today, April 29, Bélanger and his wife and son are at home because they can’t leave. While they have no more eggs or milk, “we have lots of fish to eat,” he said.

A resident of Iqaluit for 16 years, where he works as a taxi driver, Bélanger said he thinks life is getting more dangerous in Iqaluit, citing the recent armed robberies of taxi drivers and stores.

“We didn’t see that before. It’s frightening,” he said.

Bélanger said he’s not impressed that someone can hold the entire city in thrall and affect so many, causing people like him and his wife to both lose at least a day’s work.

And he said it’s not easy to talk to his son about the “bad guy” who’s keeping them prisoners inside their home.

But the takeaway from this incident can be positive Bélanger said.

“When you’re in a bind, the RCMP step in to help. That’s a good message,” he said.