Life for Iqaluit residents inside and outside the lockdown zone 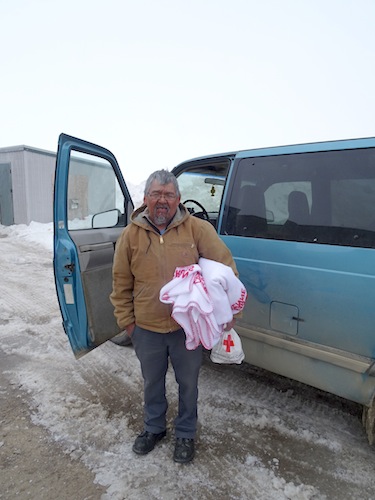 Jamesie Shoo gets ready to head to work from the shelter that Red Cross workers and Iqaluit’s recreation department opened at the Makkuttukkuvik Youth Centre inside the Arctic Winter Games facility. (PHOTO BY JANE GEORGE)

The standoff in the Iqaluit neighbourhood of Happy Valley ended April 30 at 10:07 a.m. — and, within half an hour, the barricades on roads to the area under lockdown were lifted.

For many Happy Valley residents, who were caught outside their neighbourhood when the lockdown was implemented, and for others who spent long hours stuck in their homes, the return to normalcy has brought relief.

But earlier April 30, when the duration of the standoff and lockdown remained uncertain, Nunatsiaq News took the opportunity to explore how people inside and outside the barricades were coping.

Shortly after 8 a.m. on April 30, Jamesie Shoo headed to his van carrying two white-and-red blankets he received at the Red Cross shelter and a plastic bag of hygiene products that volunteers there gave him.

Shoo, who works on the new Iqaluit airport project, lives in house 1630, within the lockdown zone of Happy Valley, where an armed standoff had prevented him from returning home.

RCMP members had first responded to a call in the 1600-block of Happy Valley at about 3:30 p.m. on April 28. After that, access to the neighbourhood around the 1600s and part of the 400s was effectively cut off.

Shoo said he and his wife left their home early April 29 after spending the first night of the lockdown there.

She stayed with relatives on Wednesday night, but there wasn’t much room for him at that residence, so he decided to sleep at the shelter.

“It’s different,” Shoo said, describing what it was like sleeping in the shelter, where about 20 cots were set up for people who can’t go home.

Shoo said he also ate supper — lasagna — and breakfast at the shelter at the Makkuttukkuvik Youth Centre inside the Arctic Winter Games facility, run by Red Cross workers and the city’s recreation department.

Grateful for the shelter, he said he remained worried about what was happening in his neighbourhood and to his neighbours during the standoff.

Indeed, life behind the barricade in Happy Valley, was no holiday. Roger Belanger, along with his wife and son, started another day in lockdown on the morning of April 30.

Unlike some others within the security perimeter, his home, house 1661, is attached to the utilidor system, so his family still had water and sewage services.

But they were down to their last two or three slices of bread and there was no more milk on the morning of April 30.

Reached by telephone early that day, Bélanger said he could hear police negotiators talking to the young man inside the nearby residence. They’d been doing that nearly all night, he said.

Bélanger said he also heard a droning noise, perhaps designed to make it difficult to sleep.

He woke up several times during the night to see what was happening outside. He had decided to keep his blinds nearly shut.

Bélanger had no contact with the RCMP after April 28 when, at the start of the standoff, when officers evacuated five children who attend a daycare at his home which is run by his wife.

Although some have left the area under lock-down, Bélanger said April 30 that he’d rather remain at home than leave.

But time slipped by slowly. He couldn’t drive his cab, which he has done in Iqaluit for the past 16 years, and his wife couldn’t run her daycare so every day, the family was losing money.

On Thursday, to pass the time, Bélanger planned to work on his other business where he takes passport and other photos for clients around the city.

He was eager for life to get back to normal: “we can’t stay on vacation forever,” he said. 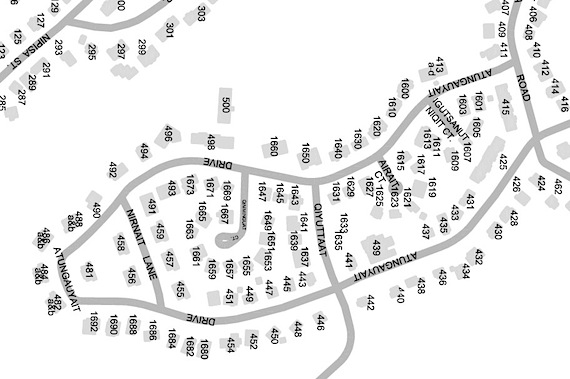 On this City of Iqaluit map, you can see the layout of Happy Valley houses. The standoff took place in and around house 1671.