Made-for-Inuit summer camp brings the North to the city

“They are together, sharing the same issues, the same struggles” 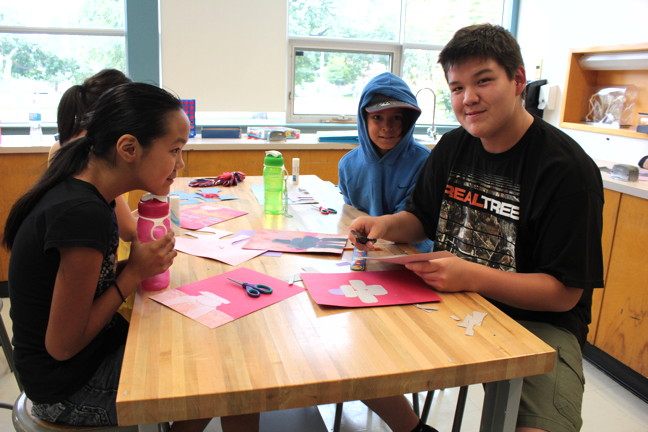 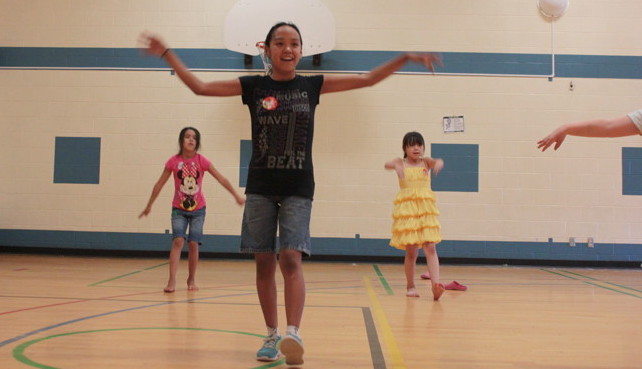 OTTAWA — “Are we playing Jenga?” asks a little boy who is crowded around a table at Ottawa’s Queen Elizabeth Public School with more than a dozen other bright-eyed Inuit kids.

“No, we’re not playing Jenga,” says a tattooed, goateed Dion Metcalfe, a large polar bear head made of bone dangling from a leather string around his ample neck.

“Many people think this is how an inuksuk has to look,” Metcalfe says, July 23. He piles the Jenga blocks to make a traditional, symmetrical inuksuk. “That’s not true. An inuksuk is a pile of rocks that tells a story.”

What if one arm is longer, he asks the kids.

“It means to go that way,” one answers, pointing to the longer side.

What if both are the same, he asks.

“It means this is the spot,” he says.

Metcalfe is a Bridging the Gap youth worker with the Ottawa Inuit Children’s Centre — he’s at the school today helping to deliver cultural programs at a free summer camp for Inuit children.

He explains that inuksuit sometimes tell a passerby where food has been cached.

“We Inuit, we always share our food. When people come to my house, I open the cupboards. People take whatever they want,” Metcalfe says.

What happens when you hunt five caribou but you only need two, he asks the children.

“Yes,” Metcalfe says. Extra food can be buried in the permafrost and preserved for someone who is on the land and unable to find food, he says. An inuksuk can mark the spot and people can help themselves if they need it.

Every summer, the OICC offers free day camps — one week in July and one in August — for the children of Inuit families who live in Ottawa.

Children who attend get free transportation to and from the camp and also enjoy lunch and snacks throughout the day. Each day contains at least one cultural component although Inuktitut and Inuit culture are woven throughout.

For the program, the camp receives $1,000 from PPA Kids, a Pan Am and Parapan Am organization, and the rest of the funding is cobbled together from various OICC programs.

In the morning, Sonia Awad, a dance instructor, works with a group of children in the gym, teaching them a hip hop dance routine.

Despite the gym’s stuffy heat, the dancers giggle and are enthusiastic, spinning on their bottoms and shaking their hips during the “freestyle” portion of the routine.

An elder usually visits every day. On July 22, Meeka Kakudluk, a former Iqaluit teacher, brought her accordion and taught the kids square dancing.

“They loved it. It was super cute,” says Jessica Peacock, the OICC’s sport and recreation coordinator who is helping to run the camp. During free time, Kakudluk taught some of the kids how to play the accordion.

“It gives them a piece of their culture,” Metcalfe says of the camp experience.

“Also they get to hang out with other Inuit kids. They go to school in the year and they’re a minority. They come to this program and they are together, sharing the same issues, the same struggles. They create life-long bonds.”

His daughter Samantha, now 11, has attended OICC programs since she was a toddler and has formed a throatsinging duo with another girl she met through the centre. They now get hired to perform at events.

Yavuz Sundu, 16, a summer student, remembers coming to OICC programs as a youngster. And now he’s getting paid to help out.

“I love it. You come here and watch the kids having so much fun. I used to come to camps like this when I was young and loved it,” said Sundu, born in Montreal to an Inuk mother from Iqaluit.

He’s fluent in French which makes him a valuable asset at the OICC offices where he sometimes does translation for staff members.

Sundu says he plans to become a tradesman one day, maybe an electrician or plumber. But he’s still got two years of high school to finish first.

He said he visited Iqaluit once, to attend his grandfather’s funeral.

“I’d like to live there because there’s lots of family. But I like the city more,” he says.

Near noon, kids are finishing up their construction paper inuksuit projects.

A little girl named Papatsie shows me hers. She has written on it “my Inuksuk tells people where the first star of the month was so they would fish there.”

A boy named Michael shows me his project with a shy smile. “This is where we find the tuktu.” 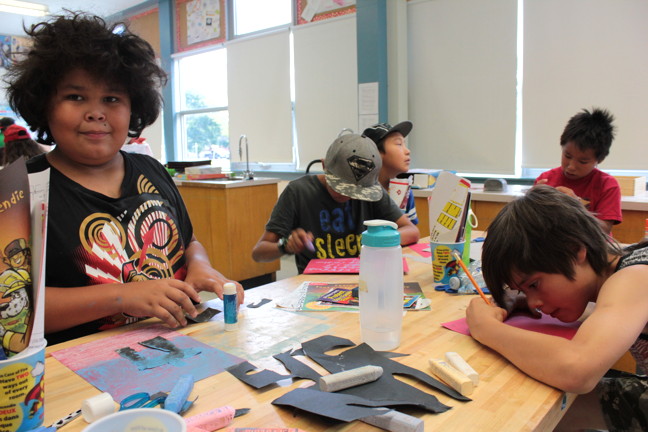 Kids attending this week’s OICC day camp in Ottawa make construction paper inuksuit after a presentation on what inuksuit are used for by Dion Metcalfe.