“The deliberate ‘hunting’ of our members is deeply disturbing” 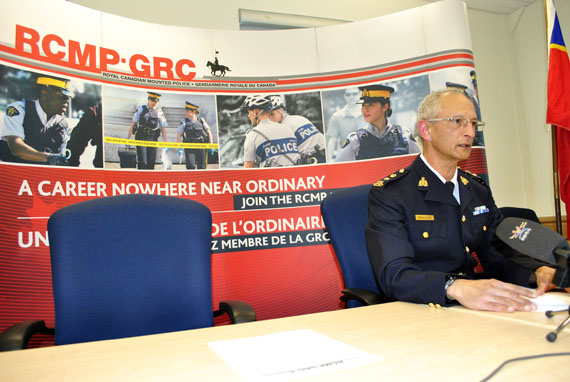 Supt. Hilton Smee of the Nunavut RCMP: “I want to stress that the deliberate ‘hunting’ of our members, shooting their residences and ultimately risking the safety of residents is deeply disturbing.” (PHOTO BY JIM BELL)

About 10 Kimmirut residents risked their lives in the early morning of July 28 to subdue an intoxicated man who, soon after the arrival of a big alcohol shipment, fired multiple rounds at the community’s RCMP detachment.

“All of these people put their lives at risk to assist our police officers in a highly volatile situation. There just aren’t enough words to express our gratitude,” Supt. Hilton Smee of the Nunavut RCMP “V” division told reporters July 28.

Smee said the RCMP does not yet have permission to release the names of the Kimmirut residents who disarmed and arrested the man. An RCMP emergency response team flew to Kimmirut, then took the man back to Iqaluit, where he now sits in custody.

A large, legally-acquired alcohol shipment had arrived in the community just prior to the shooting, Smee said. Kimmirut residents voted this past Feb. 27 to end their community’s dry status and permit the possession of alcohol under the control of a local committee.

“Kimmirut’s elders, leaders, community members and the RCMP must continue their consultation to find solutions to this violence and abuse of alcohol,” Smee said.

As of July 28, police were still investigating the shooting and were not ready to release the accused’s name or announce any charges he may face.

But Smee said the incident, like others before it, reveals the high risks that Nunavut RCMP members must face.

“I want to stress that the deliberate ‘hunting’ of our members, shooting their residences and ultimately risking the safety of residents is deeply disturbing,” he said.

With them was “a young intoxicated woman” who banged on the door of one of their staff housing units around 2 a.m. July 28 to warn police their lives were in danger.

After police took her to the RCMP detachment to protect her, a man fired multiple rounds, striking the building, a police truck and Northwestel telephone equipment, Smee said.

Because of the damage to Northwestel’s property, parts of Kimmirut lost telephone service. A Northwestel crew is now working on repairs.

At the same time RCMP members flew to Kimmirut from Iqaluit to relieve Jagoe and Cornell and “ensure their well-being.”

This is the second such incident to afflict Kimmirut this year.

This past March, a man in Kimmirut fired multiple rounds at two RCMP staff houses. Four bullets entered one unit, while five bullets entered another, endangering the lives of two families, including a young child.

David Lyta, 22, of Kimmirut, faces two counts of recklessly discharging a firearm in connection with the March shooting. If convicted, he faces a mandatory minimum prison sentence of four years.

And both incidents evoke painful memories of the 2007 killing of 20-year-old Cst. Douglas Scott, for which Pingoatuk Kolola, 37, of Kimmirut was convicted of first degree murder in 2010.

“Although these are individual, one-off actions, it continues to place this community and its residents under siege,” Smee said.

Smee said the name of the accused shooter and the nature of the charges against him will be released after police finish an investigation.

No one was injured in the incident, Smee said.