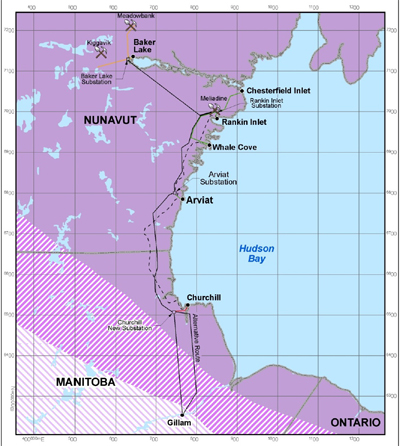 Kivallirmiut are one step closer to cleaner, more affordable power via a Manitoba-Nunavut hydro link, thanks to a resolution passed unanimously by the Hudson Bay Regional Roundtable in January.

That resolution, tabled at Nunavut’s legislature Feb. 25, gives the green light for the project’s working group to access federal funding for a final feasibility study that would determine the overall cost.

“The extension of the hydro line must be considered a project of national significance,” read the resolution.

According to the Government of Nunavut, the estimated $904-million transmission line promises to dramatically reduce electricity prices in the Kivalliq to about 13 cents per kilowatt-hour, down from levels ranging around 75 cents per kilowatt hour currently charged by the Qulliq Energy Corp.

The new source of electricity would also help move the region away from aging power plants and environmentally damaging diesel generators.

Baker Lake MLA Simeon Mikkungwak asked Community and Government Services Minister Joe Savikataaq to expand on the next steps for the project following passage of the resolution, during question period at Nunavut’s Legislature Feb. 25.

“In short, it means that they would like to pursue federal funding to fund a proper feasibility study because the scoping study that was done was [just an] estimate and they want to get a more finely detailed study with costs tied down more,” Savikataaq said.

The Energy Options Working Group, a sub-committee created by the Hudson’s Bay Regional Roundtable in 2014, oversaw the previous study.

The group delivered their report, “Hydroelectric Power from Manitoba to the Kivalliq region of Nunavut” in September 2015.

In it, the group identified the many economic, employment, environmental and social benefits that would be realized by the extension of hydroelectric power into the Kivalliq.

And the cheaper operating costs promised by the transmission line would also help develop the mineral industry in the area.

According to the report, the project would pay for itself over its lifetime, delivering projected savings of $40-million every year by reducing the region’s reliance on fossil fuels.

“It is obvious that a nation-building project of this magnitude would require significant federal investment to make into a reality,” Mikkungwak said.

“Can the [CGS] minister indicate whether funding for the Manitoba-Kivalliq hydroelectric project is a part of this request?” Mikkungwak asked.

Savikataaq repeated that the resolution as it now stands only talks about approaching the federal government for funding for the feasibility study.

If the new feasibility study is conducted in 2016, the project would remain on schedule to begin construction in 2022 and finish by 2025.