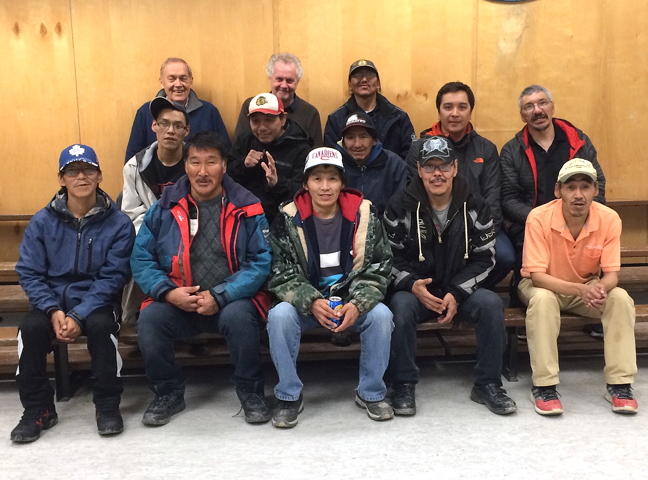 Members of the Cape Dorset men’s support group Angutiit Makigiangninga, which translates to Men Rising Up, modelled after another group of the same name in Kivalliq. Noel Kaludjak, who helped start both of those groups, and who helped to facilitate the October 2016 men’s GN roundtable in Iqaluit, will be facilitating the upcoming men’s roundtable in Rankin Inlet. (PHOTO BY NOEL KALUDJAK)

Men are part of the family and if they need support, the Government of Nunavut wants to offer it.

The GN’s family services department will hold a four-day roundtable discussion for men in Rankin Inlet in March with participants from around the Kivalliq region so they can talk about what they need to be healthy, strong leaders within their families and communities.

“Men were leaders, most of the time, and providers; leaders in their camps and strategic thinkers so that their children didn’t starve and had a warm place to stay,” said family services deputy minister Rebekah Williams, over the telephone from Iqaluit Jan. 26.

“They travelled to other parts of the area for different animal hunting. They knew when to do it and how to do it. It would be good for men in our communities to take some leadership roles in their communities and be healthy again, to be good examples. A lot of them are already—we just need to enhance that,” she said.

The planned March meeting, for male youth, 15 to 24, and adult men, 25 and over, follows the success of a similar roundtable for men in Iqaluit in October 2016, Williams said.

Men from Iqaluit and around Baffin, 20 in total, met in Nunavut’s capital, at the GN’s expense, to share stories of what’s working, what’s not working and what’s needed to make men contributing members of their communities again.

Participants identified a number of things that would help men be healthy and engaged again, such as local mental health counselling, addictions treatment, on-the-land mentorship programs, skills development and training, and hunter support.

“Some of the focus was on hunting knowing that not everybody wants to be in school or in the office or tied down doing construction. So, is there anything the government can do to support that? All those kinds of things,” Williams said.

Not only was it an opportunity for men to learn, and draw strength, from each other, the meeting itself was a boost to participants’ morale, Williams said—to know that. despite all the GN programs geared toward women, mothers and children, that men’s needs are not forgotten.

Nunavut ignores the plight of men at its own peril: many Nunavut men struggle to overcome challenges of unemployment, poverty, hopelessness, loss of traditional skills, depression, homelessness, substance abuse and anger.

Those challenges come as no surprise to Nunavimmiut and Nunavummiut who daily are bombarded by statistics and health indicators that suggest too many Inuit men fall through the cracks, take their own lives or end up in jail.

Nunatsiaq News examined some of those issues in a three part series chronicling the 2010 murder of Mappaluk Adla by his stepbrother, Peter Kingwatsiak, in Cape Dorset.

The good news is, Nunavut’s family services department sees men’s health as a priority. The bad news is, there isn’t much money to help them.

Williams said the budget for these meetings, some of which was already spent in the Baffin region last fall, amounts to only $50,000. She said her department is hoping to add to that in this year’s operational budget but so far, that’s all they have.

That needs to pay for a men’s roundtable in the Kitikmeot region this year as well, though a date has not yet been conformed.

But it’s not just about money, Williams said. The roundtable discussion is geared toward motivating men to come up with solutions specific to their community’s needs and then to use the knowledge in the room to figure out how to make those solutions work.

The GN’s family service department will support any way it can, by identifying resources, facilities and grants available inside and outside the community that men can access.

“It’s about their ideas and their decisions. We work with other departments who might be able to support them,” Williams said. “It’s about them being resourceful. It’s about them finding things for themselves. And, if they need assistance, let’s talk about that.

“People have good ideas. They just don’t know where to start.”

The Rankin Inlet roundtable is scheduled for March 13 to March 17. For more information, contact Kivalliq Counselling and Support Services in Rankin Inlet at 645-4878 or drop by during office hours, 8:30 a.m. to 5 p.m.