Mine monitoring in Nunavut under the microscope next month 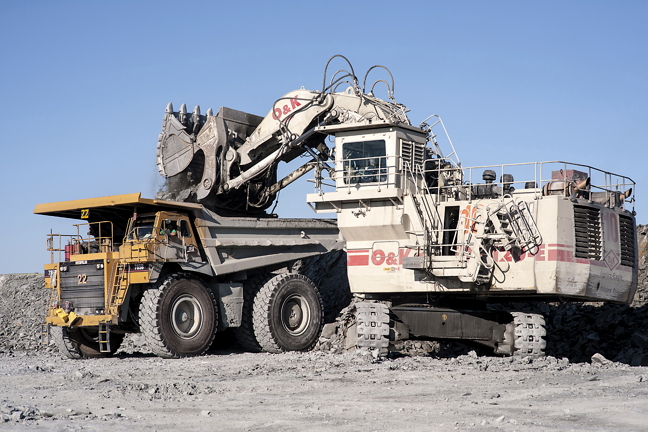 A haul truck gets loaded with rock at Agnico Eagle’s Meadowbank gold mine near Baker Lake. The Nunavut Impact Review Board has invited mining executives, government agencies and other stakeholders to a public session at the upcoming Nunavut Mining Symposium in Iqaluit April 3 to April 6 in an effort to improve how it monitors mining projects in the territory. This is the first ever meeting of its kind hosted by the NIRB. (PHOTO COURTESY OF AEM)

A lot of people with money and power or a desire for those will descend on Iqaluit from April 3 to April 6 for the annual Nunavut Mining Symposium and among all the many sessions planned this year is a unique one hosted by the Nunavut Impact Review Board.

If you’re a regular Nunatsiaq News reader, you know we write a lot about the NIRB—a board devoted to vetting commercial, government and scientific projects proposed in the Nunavut Settlement Area for their potential impact on people, animals and the land.

This year’s mining symposium in the territory’s capital is occurring just as the NIRB considers new or updated monitoring frameworks for four of its five existing project certificates.

So how does mine monitoring work in Nunavut? Are mining companies able to meet their requirements? Are those requirements realistic and sustainable? Are government agencies getting what they need to monitor impacts on fish, migratory birds and soil, for instance? Does everybody understand what everybody else is doing so they can be good environmental stewards?

After 20 years of assessing and monitoring projects in Nunavut, the NIRB wants to know what’s working and what’s not and what better time to do that than at the mining symposium, attended by mining executives, government officials and other stakeholders from around the country.

“That’s really the intent of environmental assessment, is to grow in that understanding of impacts and you do that by having monitoring in the North feed back into further impact assessments,” said Tara Arko, the NIRB’s director of technical services and moderator of the upcoming mining symposium session.

“Now that we have sufficient experience in Nunavut to understand how the monitoring framework works between all the agencies, we’re trying to solicit more active feedback.”

For instance, project proponents know how much it costs to monitor and mitigate their activities. The NIRB needs to know those costs in order to impose realistic requirements—but perhaps more significantly, to assess whether a company can afford to mine in a way that meets Nunavut standards.

If you want to learn more about how this all works, you are invited to attend the NIRB session on April 6, from 8:30 a.m. to noon at Iqaluit’s Astro Theatre.

While open to the public, the session will be focused on gathering information and covering a lot of ground in an effort to update and improve the monitoring process, if necessary, Arko said.

Members of the public will be given an opportunity to participate, she added, but general questions for the NIRB will be deferred to after the meeting.

In order to mine in Nunavut, a company first needs a project certificate from the NIRB which lists terms and conditions that must be met to mitigate the project’s potential impact on people and the environment.

There are currently five active project certificates in Nunavut including one for the now defunct Jericho diamond mine which is slated for extensive remediation starting this summer.

The remaining four are:

• Agnico Eagle’s Meliadine gold mine, not yet operational, just north of Rankin Inlet; and,

Once a project is up and running, the NIRB drafts a monitoring framework which becomes an appendix to the project certificate.

Then every year, the NIRB compiles information received from all the players named in that framework—for example Environment Canada, Fisheries and Oceans, Transport Canada—into an annual monitoring report.

The 2015-2016 annual monitoring report for the Meadowbank gold project, for example, runs nearly 100 pages and details how the company is complying with dozens of conditions set out by the NIRB.

In a case where a company is not complying with a term or condition, NIRB tries to find out why and propose a solution.

In a November 2016 letter to Baffinland regarding its most recent monitoring report, the NIRB noted, for example, that Baffinland had ceased various terrestrial monitoring programs related to vegetation, metals in soils, invasive species, den surveys and roadside waterfowl.

The NIRB instructed Baffinland to justify the suspension of those activities and also requested, “that Baffinland clarify whether it liaised with the local hunters and trappers organizations, community members and authorizing agencies prior to suspending the selected terrestrial programs in 2015.”

It also noted that Baffinland deferred aerial and acoustic marine mammal surveys during the 2016 shipping seasons and NIRB questioned whether the company was properly consulting with local people through community working groups.

“It’s very challenging for our board to be promised monitoring and mitigation activities and then the proponents come up and say, ‘oh, that’s not feasible,’” Arko said, “when they were the key commitments made that gave the board sufficient assurance to approve the project.”