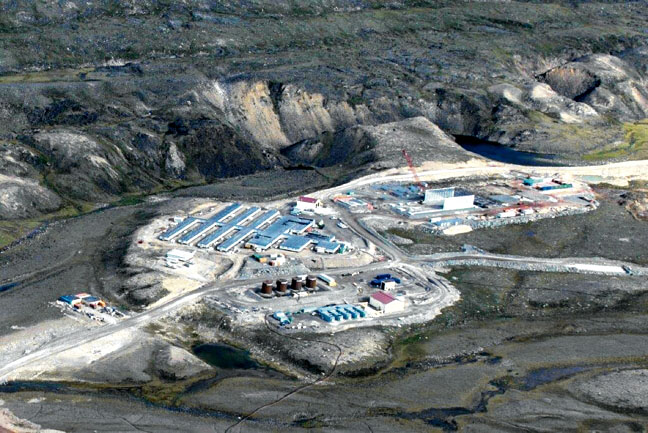 A view of the Mary River project in North Baffin. A recent letter to the editor by the Nunavut Chamber of Mines downplays the risks faced by Inuit women at mine sites, writes Sandra Omik. (FILE PHOTO)

Mr. Buchan is vice-president of the Nunavut section of the Northwest Territories and Nunavut Chamber of Mines and is employed by TMAC Resources Inc. as director of community and external relations.

He has a vested interest in ensuring Nunavut mines are portrayed quite positively to the benefit of his employer, as well as portraying the N.W.T. and Nunavut Chamber of Mines as being proactive on Indigenous women’s issues.

On the physical safety of Inuit women at mine sites, Mr. Buchan specifically says that no one will be “abducted” from a mine and that they have their own rooms to sleep in.

Mr. Buchan completely discounts all other non-physical forms of violence towards Indigenous women and casually mentions, “Although we strive for zero harm, incidents where women experience abuse can and do occur,” without offering how the mines address these incidences other than through “crime prevention.”

Non-physical violence and abuse can occur through subordination, name-calling or degradation, fear-mongering, acquiescence, silence and jeering. The tone of Mr. Buchan’s letter actually jeers at TJ Lightfoot by implying that Lightfoot based their testimony on “speculation and innuendo,” and suggesting that Lightfoot, with a graduate degree, takes a dim view of cleaning and cooking jobs and that English is used for safety reasons.

Mr. Buchan completely ignores what TJ Lightfoot was trying to convey: that Inuit should be made to feel included as part of the mining industry by ensuring that Inuktitut is facilitated within the workplace, especially for health and safety reasons, and that Indigenous women should be facilitated to advance beyond lower-level positions through proactive employment equity programs.

Without having attended or observed the Murdered and Missing Indigenous Women’s Inquiry that would have assisted in understanding the context in which the testimony was provided, he bases his letter from a Nunatsiaq News article and attacks TJ Lightfoot based on his assumptions about what the article relayed, and suggests that he was more qualified to speak as an “expert” on mines.

I would question Mr. Buchan’s ability to represent and advocate for Inuit women within mines or at the chamber of mines, if he feels threatened by an educated Indigenous person who was only trying to highlight the need to be cognizant of the marginalization that Inuit women may face daily, through internal and external negative impacts as a result of development.

TJ Lightfoot’s testimony was to help understand how best to ensure the direct and indirect risk factors that Indigenous women may be facing are addressed, based on previous examples from other parts of the country outside of Nunavut, as well as from documented evidence from published sources.

There is a real need to capture the full context of these risk factors, and if Mr. Buchan only focuses on the limited scope of physical safety of women within mines and discredits TJ Lightfoot, he is too blind to acknowledge the reality of Inuit who may have a hard time gaining more advanced, upper-level positions, or how to advocate for a socio-economic plan to address higher rates of violence as a result of mine-related income.

He is only adding to the problem by ignoring the disadvantages of Indigenous people and shifting blame away from the inadequacies of the work done by profit-based sectors to address these disadvantages.