By DAVID MURPHY AND LISA GREGOIRE 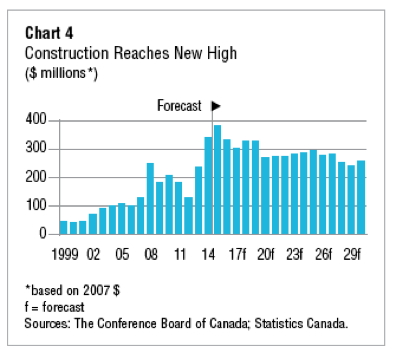 This graph, from the Conference Board of Canada’s summer economic outlook for the three territories, shows Nunavut construction has grown since its creation in 1999 and is forecast to remain strong in the coming decade as infrastructure investment continues.

The Conference Board of Canada says Nunavut’s economy is in decent shape this year, and you can thank mining development and construction for that.

The not-for-profit board projects Nunavut’s gross domestic product will grow 3.8 per cent in 2015.

That’s the highest rate of GDP growth amongst all territories and provinces, the Conference Board’s Summer 2015 Territorial Outlook said.

“Led by the construction industry, Nunavut’s outlook is decidedly more promising this year than that of its two territorial counterparts,” the report said.

The independent board, which conducts evidence-based research on behalf of governments and the private sector, twice annually examines the economic and fiscal outlook for the three Canadian territories.

Construction on Baffinland’s Mary River iron mine as well as the $143-million Canadian High Arctic Research Station (CHARS), and on Iqaluit’s $300-million airport resulted in a positive outlook for Nunavut.

As a result, construction output is also expecting to increase by 12 per cent.

“Growth, however, will be negative next year, with GDP contracting by 0.7 per cent as construction ends on the $740-million early revenue phase of the Mary River project,” the report said.

And not until 2020 will GDP bounce back, when Rankin Inlet’s Meliadine mine starts producing gold, the report predicts.

This year, however, mining production is expected to grow with shipments of iron ore leaving Mary River’s port at Milne Inlet and gold production continuing at the Meadowbank mine near Baker Lake.

And a strong mining sector is expected to benefit the labour market, the report said. In 2015, 105 jobs are slated for creation, with another 200 in 2016.

“The unemployment rate will stabilize around 12.4 per cent over the next two years,” the report said.

The fishing industry is growing rapidly too, the Board said. The industry increased by 14 per cent in 2015. That’s on top of the 16 per cent growth in 2014.

About 370 Nunavummiut are employed by the fisheries industry, which has a total market value of more than $86 million.

The report also notes that a robust economy will be helpful to support a rapidly growing population — both from a high birth rate and net migration into the territory as a result of jobs and other economic opportunities.

The board predicts Nunavut’s population will grow at a compound rate of 1.3 per cent per year from 2015 to 2030, more rapidly than the national rate of one per cent, and it’s “almost entirely due to the territory’s high fertility rate of 3.1 births per woman expected over the forecast period.”

He sent a letter to Bernard Valcourt, federal Aboriginal affairs minister, in May to support fast-tracking Baffinland’s latest project changes past a land use hurdle so it can undergo an environmental assessment with the Nunavut Impact Review Board.

Taptuna defended his actions by telling reporters at the time, “that’s our job, to ensure that our people find employment.”

Speaking to Nunatsiaq News on the phone from Newfoundland last week, while attending a first ministers meeting, Taptuna reaffirmed that position.

“It’s something we’ve got to do now because there’s a lot of unemployment, there’s a lot of young people that are going to be looking for work in four and five and 10 years down the line and if it’s just employment within the government, that’s not going to work,” Taptuna said July 16.

“They’ll perpetually be on the welfare line or on social assistance. There has to be some economic activity and at this point, mining and exploration is one of the key things where Nunavummiut can actually, really benefit from.

“On average, we’re going to be looking for 2,300 potential new jobs among a population of 4,600 youth and we can’t sit by idly and hope for the best. There has to be something for them.”

The Conference Board expects the Government of Nunavut to produce a seventh straight budget surplus amounting to $23 million in the 2015-16 fiscal year.

And more infrastructure projects could be on the way since Ottawa increased Nunavut’s borrowing limit to $650 million from its previous limit of $400 million, the report said.