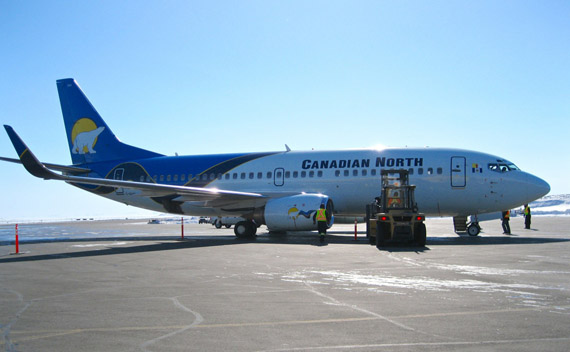 MLA Joe Enook fears a Canadian North-First Air merger will have a negative impact on prices and services in Nunavut. (PHOTO BY PETER VARGA)

Nunavik’s Makivik Corp. and Norterra Inc. — owners, respectively, of First Air and Canadian North — announced this past April that they are in talks aimed at merging the two airlines.

“As every member of this house and all Nunavummiut are well aware, our territory’s communities and residents depend on accessible and affordable air travel,” Enook told the Nunavut legislature May 27.

“The possibility that the two largest airlines operating in Nunavut may merge into a single entity has caused numerous questions and concerns to be raised regarding such issues as airfares and service levels.”

A merger would likely have an impact on the Nunavut government, Enook said, which spends tens of millions every year on travel and transportation contracts currently provided by both airlines.

While the Competition Bureau has confirmed that it will review the proposed Canadian North-First Air merger, Enook on May 27 called on the GN’s department of Economic Development and Transportation to undertake its own study on the potential impact of a merger, and release its findings to Nunavummiut.

But Economic Development minister George Kuksuk said the issue is out of the GN’s hands, and refused to take a position on the merger.

“We all have heard that there will be merger negotiations between Canadian North and First Air,” Kuksuk told the assembly. “For that reason, many things have to be prepared and we have no plans in place at this time in that respect.”

“While the Canadian Transportation Board and the airlines are doing their work, we cannot do anything about it.”

While there are fears that a new single airline will mean more expensive airfares across the territory, Makivik and Norterra both say a merger “would improve the sustainability of these critical Inuit birthright enterprises and would also create better air services and new economic development opportunities across the north.”

But it won’t happen any time soon; the merger depends on the completion of negotiations and a federal regulatory review, which could take months.