Construction to begin on both projects in 2017 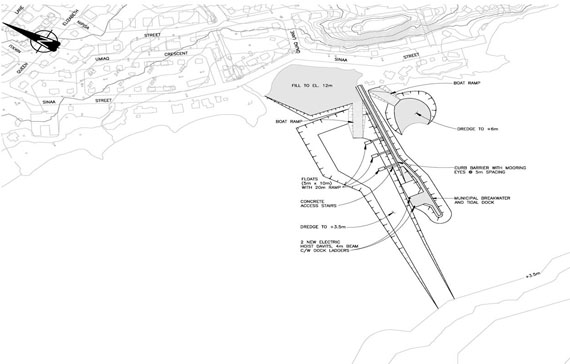 This conceptual drawing shows planned improvements to the existing small-craft breakwater off Iqaluit’s beach area, part of the port project that the Government of Nunavut will likely start in 2017, after the project is screened by the Nunavut Impact Review Board. In addition to that, the new deepwater port, located past the existing causeway, is set for completion by 2020. The deepwater docking facility will include a single vessel berth with an additional sealift barge landing area, plus a laydown area for sealift goods. (IMAGE COURTESY OF THE GN)

Port projects in Iqaluit and Pond Inlet got the go-ahead from MLAs at the close of the spring session of legislature, although work won’t begin this summer, as originally planned.

Of that, $5 million will go to the 2016-17 portion of the Iqaluit deep-sea port and $1.2 million to this year’s portion of a small craft harbour in Pond Inlet.

The bulk of the projects’ tabs will be picked up by the federal government, who, making good on a campaign promise, has invested $63 million into Iqaluit’s port and another $30 million to Pond Inlet’s project.

MLAs will approve the GN’s remaining contributions to the ports over the next two years, said Jim Stevens, assistant deputy minister of Economic Development and Transportation.

The next few months will see a lot of planning, environmental work and engineering design for both marine infrastructure projects.

That work will all be submitted to the Nunavut Impact Review Board for screening, Stevens said, likely by the late fall or early winter of this year.

“Once that’s done, we’ll be able to go to a construction procurement process,” he said.

“Construction is expected to commence by the summer of 2017, for both.”

In Iqaluit, the $84 million deep water port is planned for South Polaris, an area just beside the community’s causeway close to the intake area where fuel is offloaded.

The port will include a single vessel docking face with an additional sealift barge landing, plus a laydown area for the sealift.

A second component of the project includes a small craft facility around the existing breakwater, the GN has said. Crews will excavate the area to create better boat access at low tide, install floating docks and improve parking for users.

In Pond Inlet, Stevens said his department has already shown conceptual drawings of the $40 million small craft harbour to residents.

“It will go in and around the new boat launching ramp, that’s about the centre of the project,” Stevens said.

“There are remnants of the old breakwater that still exists — that will be the easterly limit of the project.”

“We will be meeting with the communities… for additional advice on the design we’re proposing and any other issues they want to bring forward,” Stevens said.