Montreal project protects Inuit carvers from getting ripped off 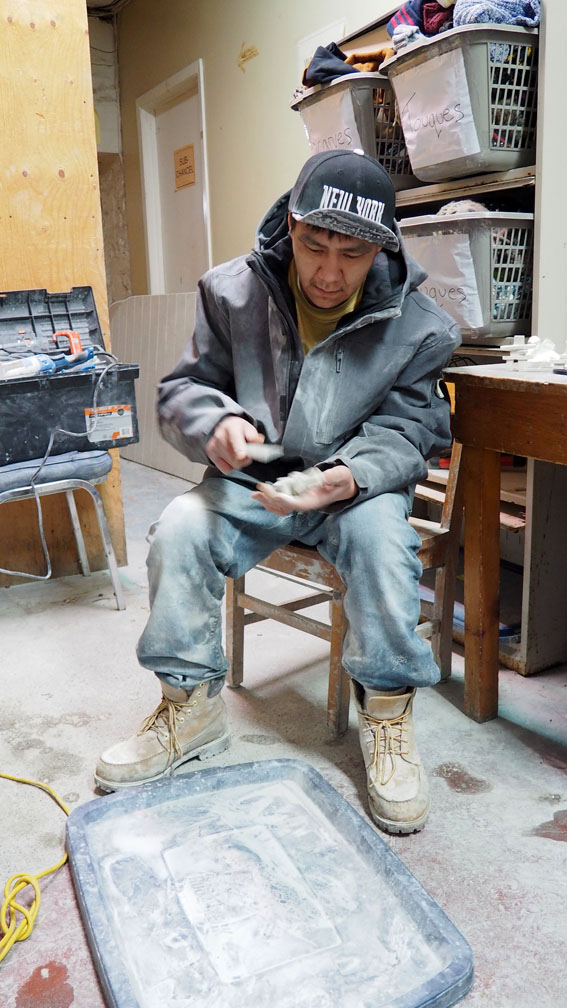 John Awa of Montreal now sells his carvings through the Open Door—because the centre allows him to keep 100 per cent of what he’s paid for his work. (PHOTO BY COURTNEY EDGAR)

MONTREAL—John Awa carves inuksuks in the basement of the Open Door shelter in Montreal.

Clothes, hands and face covered in dust, he has three carvings completed by the early afternoon and will try to sell his work before the evening.

Throughout the 11 years he has lived in Montreal, he would mostly go to galleries in the tourist-populated Old Montreal area to make money, but starting last spring, he’s been trying a new approach.

Since then, Awa and other Inuit carvers in Montreal prefer selling their work directly through the Open Door, where the shelter runs a project aimed at helping the carvers build financial independence.

The shelter supplies stone and tools, space to carve, and opportunities for carvers to network, online and offline, and sell their art themselves.

It is just more profitable to the artist and less expensive for the consumer, without the middle man of a gallery.

Carvers get to pocket 100 per cent of their profits, even if they sell for a lower price than valued at a gallery or tourist souvenir shop.

Awa—who is originally from Pond Inlet and has been carving since he was a child—because, he says, it is in his blood—points to the three different-sized inuksuks he has just completed, sitting on a shelf beside him.

The galleries typically pay less than 30 per cent of what the carving is worth, Awa said.

When he goes to a gallery to sell his work, he says he usually only receives $20 to $80 cash—even for larger and more detailed pieces.

Then Awa often finds out, when friends go in pretending to be tourists, that his statues are sold by the gallery for sometimes six to 10 times the price he was paid.

He even recalls how once a well-known fine-art gallery owner gave him $60 for a carving that they later priced for sale at $400—with 15 per cent to the artist and 85 per cent for the gallery.

Awa says he went to that gallery afterwards and argued with the owner about it. Although in the end they did return his sculpture, he no longer sells there as a result.

Awa points to an inuksuk and says he sold one of a similar size—four inches tall—to another gallery for $50 and the gallery then listed it for $500. That is a 10:90 ratio.

“They don’t even want us to look at the prices, to look inside the store,” Awa said.

The galleries that his allegations refer to—Images Boreale and Heritage—did not return our requests for an interview.

Zack Ingles, the operations manager at Open Door, said this program started at the end of last spring.

“At first we started it because we saw people coming in saying that they were carvers,” Ingles said.

But although there are other Montreal organizations that help Inuit carvers practise their trade, providing them with stone and a workplace, they usually still take a cut from the sale, Ingles said.

So the Open Door decided to take it a step further.

“We sourced donations for these folks, give them all of the proceeds and expect nothing in return,” Ingles said.

“The carvers are in precarious housing situations, some even sleep in the street so that is a way that they can have money in their pocket right away.”

The staff at Open Door even help with sales when they can, either in person or through their social media pages. They step in to ensure that the artists are getting paid a fair wage.

“We ask them what they would sell it to a gallery for and expect that the gallery would do a mark-up on it, so we try to find somewhere in between,” Ingles said.

“We work with the carvers to make sure that they are not being low-balled, that they are getting a fair price for their carvings,” he said. “Being on the street can affect their self esteem, so if someone is offering $50, they might take it even though it is worth $150.”

Even at the shelter or online, Ingles says he sees some surprisingly low offers.

“We really see that as taking advantage of people who are in rough situations. They need money so they will take the money. So that is where we try to step in and be an intermediary to advocate on their behalf.”

Word started to travel quickly that Open Door had free stone and power tools, so more Inuit artists have started to show up there to work on their carvings.

Right now, they have six artists who take part in this program on a daily basis, Ingles said.

Whenever the Open Door manages to track down money for new stone, Ingles takes a group of the carvers shopping.

“They climb through all the bins to find the right stones,” Ingles said. “Its just a real treat for me to be able to just say: here is our budget, take whatever you like.”

Sometimes staff at the Open Door hear critics telling them that this service just enables some of their visitors’ addictions or perpetuates substance abuse, but Ingles does not see it this way.

“If you want to help someone in need, you have to give with abandon, and not expect what they are going to do with it—to have that kind of trust and level of respect,” Ingles said.