Museum of Nature gets big financial boost for Arctic Gallery 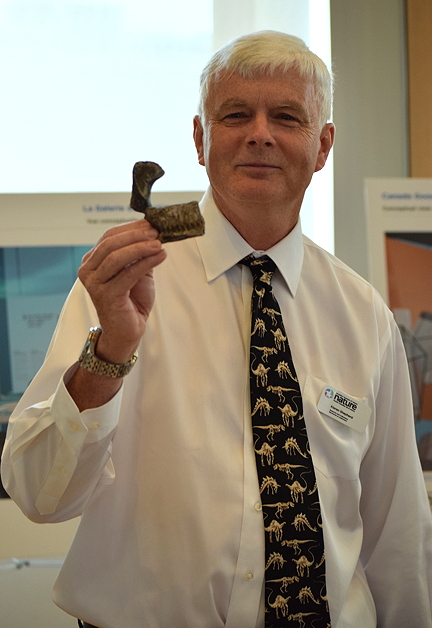 Kieran Shepherd, curator of paleobiology at the Canadian Museum of Nature in Ottawa, wears a dinosaur tie and holds up a jawbone at a museum press conference regarding its new permanent Arctic gallery to be opened next summer. (PHOTO BY COURTNEY EDGAR)

OTTAWA—A large circumpolar map lies on the floor and people walk over it, exploring the relics of the Arctic.

Some mastodon teeth, fossils and a display of Nunavut plants were part of a sample exhibit in the upcoming 8,000-square-foot gallery which the Canadian Museum of Nature will open next summer in Ottawa.

The museum announced Sept. 20 that the outerwear manufacturing company, Canada Goose, known for its warm parkas, will sponsor its new Arctic Gallery, to the tune of $1.5 million—one of its largest corporate sponsorships to date.

With that investment, the museum plans to create a permanent exhibit for the next 10 years, shining a light on northern dinosaurs, rocks, minerals, volcanoes, flora and fauna—with attention to the human angle through different perspectives.

The gallery will open June 21, 2017, just in time for Canada’s big 150th anniversary celebration. And through the gallery, curators hope to challenge perceptions of the Arctic and share some different, Indigenous stories.

“The goal of this gallery is to enhance and transform people’s understanding of the Arctic and its importance to Canada in the 21st century,” said Meg Beckel, museum president and CEO, at the Sept. 20 news conference in Ottawa.

Since Canada’s Arctic represents about 40 per cent of the country’s land mass, and is home to more than 100,000 people, the Canada Goose Arctic Gallery hopes to immerse visitors in a region which most will never have the chance to explore in person, a news release on new gallery noted.

“Museums play an integral role in preserving and protecting our culture,” David McGuinty, Liberal MP for Ottawa South, said at the event. “They bring us together. They make us stronger.”

The gallery will look at four distinct areas, geography, climate, sustainability and ecosystems, to showcase that there is more than one definition of what comprises the Arctic.

The exhibit will also feature projected multimedia northern lights for visitors to experience first-hand, with the National Film Board of Canada seeking to recreate the total Arctic experience using sound, light and images.

A gallery called “Inuinnauyugut: We are Inuinnait,” presented by the Kitikmeot Heritage Society of Cambridge Bay, will be devoted to the artworks of these northwestern communities, designed to encourage visitors to rethink the centennial anniversary of Inuinnait contact with the western world.

By pairing historic artifacts collected by the Canadian Arctic Expedition with contemporary artworks and stories, the exhibit hopes to explore how the world has changed, adapted and persevered.

There is a critical need for more Canadians to increase their awareness on the Arctic’s geography, its history and the people who have lived there for years, said Kevin Spreekmeester, Canada Goose’s chief brand officer, at the news conference.

“I travelled on many occasions over the years in the Canadian Arctic,” he said. “And it never ceases to amaze me.”

“And every time I return–without fail–I wish that I could share it with my friends, my colleagues and my peers. That’s why this is so exciting.”