MV Nunavik: from Quebec to China via the Northwest Passage 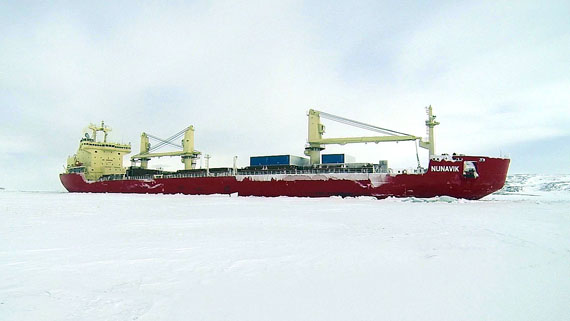 The MV Nunavik, a vessel touted by its owners as one of the most powerful ice-breaking bulk carriers in the world, set out Sept. 19 on a voyage from Deception Bay, Quebec to northeastern China — through the Northwest Passage.

Owned by the Montreal-based Fednav Ltd., the MV Nunavik carries 23,000 tonnes of nickel concentrate extracted from the Chinese-owned Nunavik Nickel Mine near Deception Bay, Fednav said in a news release.

The Nunavik Nickel Mine is operated by Canadian Royalties Inc, a wholly-owned subsidiary of the China-based Jilin Jien Nickel Industry Co. Ltd.

On its 20-day voyage to the port of Bayuquan in northeast China, the vessel will sail for about 5,000 nautical miles, or 9,400 kilometres.

Fednav said that’s 40 per cent shorter than the normal Panama Canal route and that they’ll save more than 1,300 tonnes of greenhouse gas emissions.

The 31,700-tonne MV Nunavik will become one of the first commercial vessels to make an unescorted voyage through the Northwest Passage with an Arctic cargo.

It boasts the first ballast treatment system installed on a Canadian-owned ship, something that many scientists and researchers have recommended to prevent the spread of invasive marine species.

Fednav also said they consulted the World Wildlife Fund and experts with the federal government to find a route that causes the least impact on marine wildlife.

“Fednav and WWF-Canada have partnered on maritime transport in Arctic waters that aims precisely to minimize the impact of its ship’s passage,” Fednav said.

The company already owns and operates two of the world’s most powerful ice-breaking commercial vessels, the MV Arctic and the MV Umiak I, which serve the Voisey’s Bay nickel mine in northern Labrador.

On its voyage through the Northwest Passage, the Nunavik will be supported by a shore-based team of ice navigation specialists from Fednav and its subsidiary, Enfotec.

“Fednav is proud to have designed this remarkable ship and to plan the first independent commercial voyage through the Northwest Passage,” said Paul Pathy, the president and co-CEO of Fednav.

Fednav said last March that “in naming this new ship Nunavik, Fednav wanted to recognize the inhabitants and the region in which it will operate, as well as its project partner, Nunavik Nickel.”

You can follow the MV Nunavik’s voyage at this web page.

Last year the project ran into serious financial problems when it appeared as if the company’s financier, the China Development Bank, had stopped extending credit to the project.

In August 2013, the Quebec business magazine Les Affaires reported that construction contractors, including the Inuit-owned Laval Fortin Adams, had filed $54 million in claims against Canadian Royalties.

At the same time, a Toronto-based firm called Forbes and Manhattan was hired to manage the mine and develop a new plan to bring it into production.

Forbes and Manhattan installed Parviz Farsangi as CEO of Canadian Royalties and the turnaround began, with two shipments of copper that were used to pay the company’s disgruntled sub-contractors.

In July 2014, Jilin Jien said that “Canadian Royalties runs well” and earlier this month announced the mine had been commissioned Sept. 3, 2014 in a ceremony.

On the Canadian Royalties website at www.canadianroyalties.com, a link marked “Nunavik Nickel Project” leads to a blank page in all three of the website’s languages.