”It’s like landing on the moon. It doesn’t happen every day” 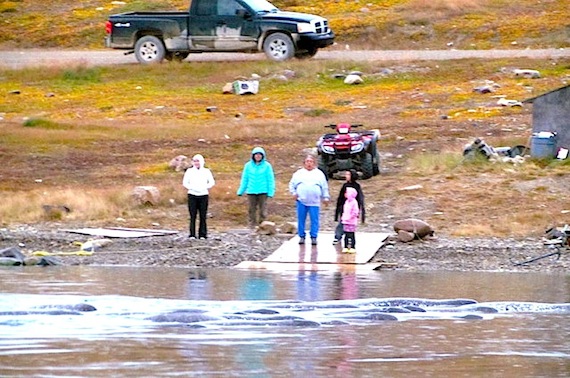 People of all ages came down to the shore in Cambridge Bay on Aug. 25 to see the incredible spectacle of pods of narwhals swimming by. (PHOTO COURTESY OF D. STERN)

An amazing sight drew the curious to the shore in Cambridge Bay on the evening of Aug. 25: the swelling ripples of swimming narwhal pods.

While pods of narwhals have been seen at least twice over the past 15 years in Cambridge Bay, narwhals aren’t commonly seen there. Maps of the whales’ range in the Canadian Arctic don’t show that they ever pass anywhere near Victoria Island.

But there they were.

“This is a once-in-a-lifetime thing, beautiful. This is a rare occasion. It’s like landing on the moon. It doesn’t happen every day,” said Joe Otokiak, whose son-in-law landed two of the first narwhals.

Doug Stern, who lives by the shore in Cambridge Bay, was going out in his boat after supper to fetch rocks for a wall he’s making when he spotted a pod of about 15 narwhals about 200 metres from shore.

Stern said the narwhals resurfaced a few hundred metres away, then headed up into the bay to a char-rich stream where it’s quite shallow.

“The char run is just beginning, and narwhal eat fish, so maybe they were here to check it out,” Stern said.

Other pods were soon spotted, and the news of the narwhals spread like wildfire, drawing everyone from young kids to elders down to the shore.

And it wasn’t long before hunters who had hunted whales before — or those who had just dreamt of it — headed out on to the water.

By dark, the first narwhals were hit — a female and a smaller, young narwhal by Gilbert Moses Panioyak Tikhak. “I’m so happy,” he said of his first whale hunt.

His mother, Gwen Tikhak, who’d never butchered a narwhal before, cut up her son’s catch, sending many in Cambridge Bay home with fresh narwhal muktuk.

“I love to share with the community,” she said. “One happy community! I just about never get myself muktuk. I thought of the others first while we were cutting it up. Happy meals everyone!”

Pods of narwhals continued to mill around in the waters near the community, with more whales taken throughout the weekend, and into the beginning of this week, including at least one “tusker” by Pamiok Angohiatok.

Julia Ogina and her spouse Jerry Puglik were among those who went out on the bay to hunt — “awesome,” is how Ogina, known for her performances of a traditional whale hunting song, described the experience.

Facebookers from Cambridge Bay buzzed on-line with comments about the hunt and congratulations to the successful hunters.

“I’m just thrilled about that and I’m just proud of him. Thanks to all who helped with processing the whale. Thanks all from the bottom of our hearts,” said Mabel Heklok Angohiatok whose husband landed a tusked narwhal.

“What a glorious day we had, so much fun to see narwhals in Cambridge Bay. Thank you to the boat drivers and hunters for the day.”

The hunt united Inuit residents in this town of 1,500, which is 80 per cent Inuit. “It’s a blessing for the community to come together and help one another” was James Panioyak’s reflection.

To keep the hunt official, directors of the Ikalutuktiak Hunters and Trappers Organization held an emergency meeting to distribute 10 tags from the region’s unused allotment to hunters who had landed narwhal.