“The colonial legacy of naming is about power and control” 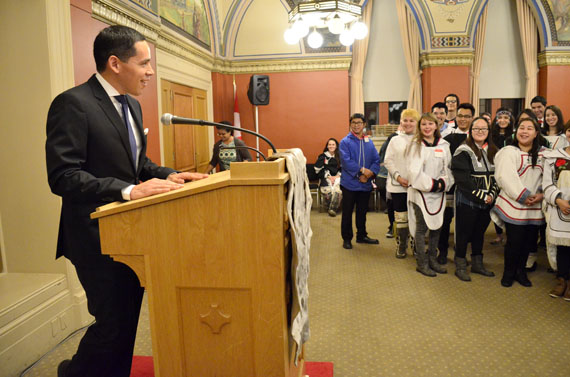 I am determined to achieve greater Inuit unity in order to mobilize against our continued colonization and together fight for equity in Canada.

Our overarching culture, language and identity may have the same foundation but our different political and colonial histories can influence the way we see the world, the way we see ourselves, and the way we treat each other.

Inuit Tapiriit Kanatami has demanded that the Edmonton Canadian Football League team stop using the moniker “Eskimos” as part of an ongoing fight against colonization in the name of reconciliation. This stance has been supported by many Inuit, although I fully understand and appreciate that not all Inuit view the term as offensive.

The colonial legacy of naming is about power and control. The issue of Inuit being used as a sports team mascot matters, because this is the way this legacy continues to play out in popular culture.

This issue is about our right to self-determine who we are on our own terms. We are not mascots or emblems.

In a time when we still struggle to be heard, where there is vast indifference to our socio-economic condition, where we still fight for acceptance and respect from Canadians every day, dominant society continues to use us, a minority Indigenous people, as their mascots for their sports entertainment.

Allowing this practice is a fundamental departure from how we wish to be treated in all other conversations we have with Canada.

Consider the legacy of naming in our experience. In the past, non-Inuit imposed their own names onto our lands and bodies in place of centuries-old Inuktut ones. Inuktut place names were systematically substituted for English names that then became part of the basis for Canadian land ownership.

The Inuit land claims movement was in large part a fight to remain visible on our own terms at a time when our place names, history and society were literally being wiped off the Canadian map. At the same time, Government of Canada initiatives imposed serial numbers and dog tags onto our people instead of recognizing traditional, given names.

The response by Canadians to my stance against the use of the name “Eskimos” reflects how Inuit and the issues we care about are often viewed. Some have spoken out in support of our right to self-determination, and for that I am most grateful. A vocal minority used the opportunity to express hatred towards us, while the majority simply said this issue does not matter.

Sadly, the majority of responses showed us once again that when we speak, our voice means absolutely nothing. True reconciliation at the national level will only be possible when the federal government, media, and all Canadians do not feel they have a right to decide on their terms, whether or not the Inuit-specific issues we raise are legitimate or not before engaging in a path to resolution.

This is why we need unity. I believe that we can stand and fight together and support one another even on Inuit issues that some individuals may not have a negative personal association with.

If those Inuit, many of whom were the most successful in our society, had decided that because they were not negatively affected personally then they would fight against the lawsuit, we would have not been included in the Indian Residential School Settlement Agreement, the Truth and Reconciliation process, or any of the health supports that have been offered to date for all Inuit residential school survivors. Unity won.

So for all my fellow Inuit who are not offended, please consider that many Inuit are offended by the term. Many Inuit do not want to be mascots. We cannot divorce this particular issue from our colonial relationship with Canada.

I ask that we stand together across Inuit Nunangat and say, for the good of Inuit in Canada, we will combat colonization while supporting healing, reconciliation, and mutual respect in all its varied forms. I will continue to do all I can to work toward this goal.