“I pledge as ITK president to ensure that ITK does the absolute most that it can,” says Natan Obed

Natan Obed, the president of Inuit Tapiriit Kanatami, at the opening of an ITK forum at the Wabano Centre in Ottawa on child sexual abuse in Inuit Nunangat on Tuesday, Nov. 20. “I pledge as ITK president to ensure that ITK does the absolute most that it can to respond to the truth that we know, and to build our society to what we know it can be,” Obed said. (PHOTO BY JIM BELL) 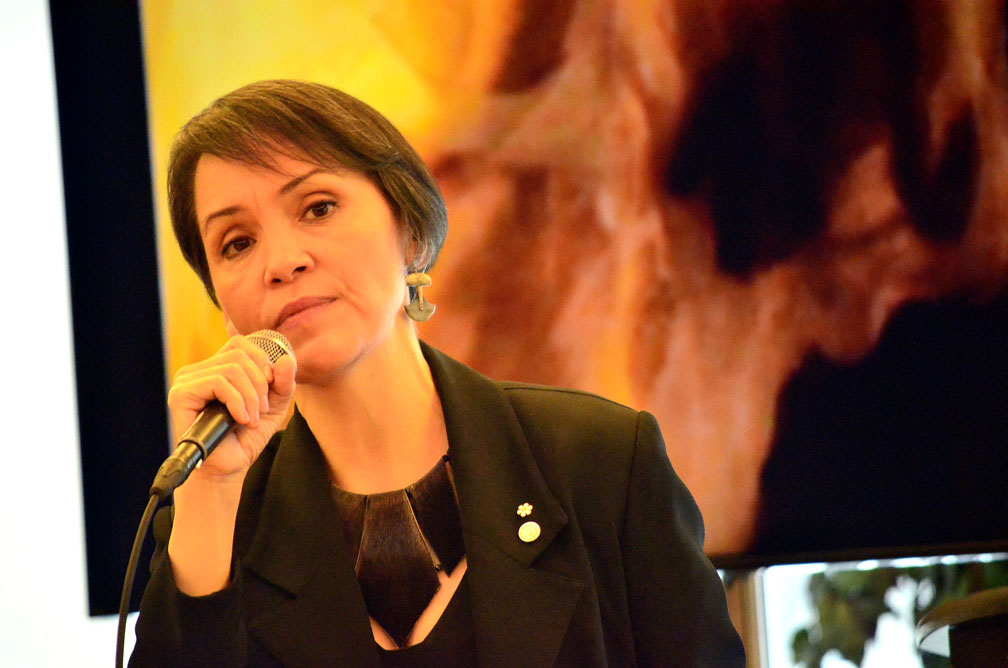 Nunavut’s Juno Award winning singer-songwriter, Susan Aglukark, was the keynote speaker and performer at the opening of a two-day forum on child sexual abuse that Inuit Tapiriit Kanatami is holding Nov. 20 and Nov. 21 at the Wabano Centre in Ottawa. Aglukark is the creator of the Arctic Rose Foundation, which seeks to help northern children and youth deal with poverty, addiction, trauma and abuse. “This is has been an issue since I moved here to Ottawa, and there has not been much movement by the political leadership in this area. It does the heart good 26 years later to be a part of such a forum,” Aglukark said Nov. 20. (PHOTO BY JIM BELL)

OTTAWA—Natan Obed, the president of Inuit Tapiriit Kanatami, vowed yesterday that Canada’s national Inuit organization will dedicate itself to the prevention of child sexual abuse in Inuit Nunangat.

“I pledge as ITK president to ensure that ITK does the absolute most that it can to respond to the truth that we know, and to build our society to what we know it can be,” Obed said at a forum on Tuesday, Nov. 21.

By “truth,” Obed means the oft-suppressed reality of child sexual abuse in Inuit communities, which for generations has been a subject few have been willing to acknowledge.

“This issue has been taboo in our communities, and even when it is not taboo, it is intensely difficult to talk about,” Obed said.

Obed made the remarks at the Nov. 20 opening of a two-day expert forum at Ottawa’s Wabano Centre.

The gathering brought together 65 to 70 people from Nunavut, Nunavik, Nunatsiavut, the Inuvialuit settlement region and Greenland to talk about the best ways of protecting children from sexual abuse. But because of the “sensitive nature” of child sexual abuse, only the first 90 minutes of the gathering was open to media, ITK said.

For ITK, the forum is tied into the organization’s 2016 National Inuit Suicide Prevention Strategy, which acknowledged research that found maltreatment in childhood is a major risk factor for suicide, depression, alcohol abuse, obesity and other life-long problems.

For example, a major study released in 2013 found that of the 120 people in Nunavut who died by suicide between 2003 and 2006, 47.5 per cent had suffered physical or sexual abuse as children.

In his speech, Obed cited some statistics that reveal the staggering levels of child sexual abuse within Inuit communities.

And of 1,710 Inuit respondents to a community wellness survey done during the 2007-08 national Inuit health survey, 41 per cent said they experienced severe sexual abuse during childhood, including somebody threatening to have sex with them and sexually attacking them, he said.

That reality contradicts the story that Inuit tell themselves, Obed said.

“We talk about our love for children as one of the first things that is great about Inuit society. We talk about how different we are in many ways, and how our community comes together and how we care for those most in need,” he said.

“The rates of child sexual abuse go against that narrative.”

Another difficulty is that the perpetrators of child sexual abuse are often other Inuit living in communities and sometimes family members, Obed said.

“How do we come to terms with this? Especially when we know the rates are so high,” he said.

It’s important to talk openly about violence and sexual abuse against children, Obed said at the forum, which opened on Universal Children’s Day.

At the same time, the current state of dysfunction throughout Inuit Nunangat does not determine the future.

He also thanked Pauktuutit, the national Inuit women’s association, for keeping the issue alive during times when few political leaders were willing to talk about child sexual abuse or do anything about it.

“Our children should no longer experience physical abuse, sexual abuse, emotional abuse or neglect in childhood. These are rights that all children have,” Obed said.

The keynote speaker at the forum, Juno award winner, singer-songwriter and children’s rights activist Susan Aglukark, also decried the lack of political leadership in the past on child sexual abuse.

“It’s very exciting to be in the company of some real leaders, real incredible Inuit leaders, something we really needed 25, 26 years ago, that we have now,” she said.

“This was an issue 26 years ago when I moved here to Ottawa, and there has not been much movement by the political leadership in this area. So it does the heart good, 26 years later, to be a part of such a forum.”

This past February, at a hearing in Rankin Inlet held by the National Inquiry into Missing and Murdered Indigenous Women and Girls, she stunned the entire territory when she named the man who sexually abused her in the early 1980s when she was only eight.

“Norman Ford, you didn’t win. Not now, not ever. Now the community knows what you did,” she said last February.

Ford was convicted of sexual offences about 10 years after that abuse and sentenced to 18 months in jail.

“That was the first step towards my own healing almost 30 years ago,” Aglukark said this week.

But at that time, there were no supports in the community, either for her or for her parents, although her parents were able to give her the only thing they knew, which was their religious faith.

But in the small town of Rankin Inlet, she kept running into her abuser.

“So he comes back home to Rankin Inlet and figures that all things are forgiven and forgotten. We end up always bumping into each other at church, at the Northern store, at the co-op around the corner. For someone who had won the case, you don’t feel like you had won anything,” she said.

That’s one reason she left home and moved to the south, where she submitted some songs to CBC and launched her celebrated career as a performer, recording artist and songwriter.

At the same time, she began to ponder the “disconnects” that kept her from finding what she needed to recover, and through the years, continued to use her art to explore herself and her experiences.

“We can be happy … if we can get past all the habits that we are forced to create because of the assault and the unresolved issues of the abuse,” she said.

On Universal Childrens Day ... by on Scribd