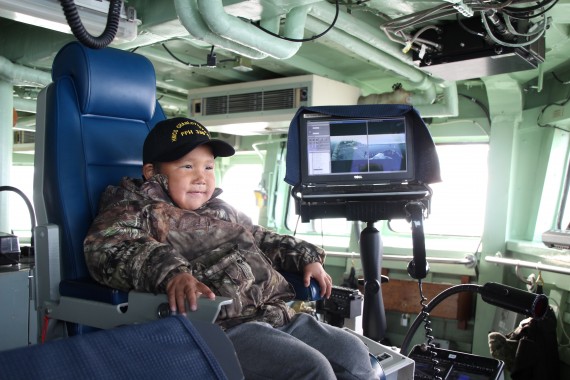 Samson Akeeagok, 6, mans the captain’s chair on board HMCS Charlottetown, while the naval ship anchors in Frobisher Bay on Aug. 27.  (PHOTO BY BETH BROWN) 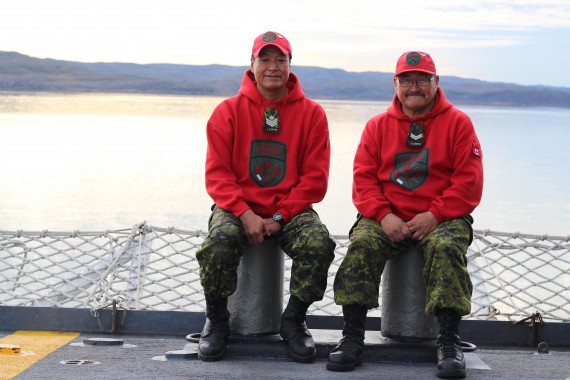 Rangers Moses Iqqaqsaq of Igloolik and Jay Killiktee of Clyde River spent two weeks on HMCS Charlottetown as part of Operation Nanook, sailing to Greenland and back. (PHOTO BY BETH BROWN)

When heavy ice in Lancaster Sound put Devon Island out of reach for the navy vessel HMCS Charlottetown last week, waters in and around Frobisher Bay became a second choice for practising ocean scenarios that were part of the military’s annual Arctic exercise, Operation Nanook.

But while there wasn’t any ice, there was some serious wind—enough for Environment Canada to issue a wind warning on Aug. 23.

This left the navy with an opportunity to practise working in harsh conditions, Cmdr. Nathan Decicco said, while speaking with Iqaluit reporters from the flight deck of his ship on Monday, Aug. 27.

That day, Iqaluit residents from the Government of Nunavut, Nunavut Tunngavik Inc., Crown-Indigenous Relations and Northern Affairs, and the City of Iqaluit were invited on board HMCS Charlottetown to get a tour of the ship that they could have seen from a distance for a few days.

“It’s a really unique opportunity to be able to come on board and to talk to sailors, ask questions and understand where these ships go and what the Royal Canadian Navy does for the Canadian government around the world,” Decicco said, adding that many Canadians never get that chance.

HMCS Charlottetown is a naval frigate able to carry up to 200 sailors.

During Operation Nanook, which started on Aug. 12 and runs until Sept. 4, the ship’s crew practised techniques for anti-submarine warfare, how to board and search another vessel, and gunnery exercises.

The ship first came to Iqaluit on Aug. 16, where it picked up two Canadian Rangers who sailed with the company to Nuuk, Greenland.

For long-time Rangers Moses Iqqaqsaq of Igloolik and Jay Killiktee of Clyde River, it was the first they had either worked with the navy or visited Greenland.

En route back to Iqaluit, the two rangers camped with the army last week at an air cadet camp around 30 kilometres outside Iqaluit, where they learned how to set up tents and also shared with the military what they knew about bear monitoring and working on the land.

“It was really windy, we had to walk with our rifle towards the wind. It was hard and tiring, but it was fun,” Iqqaqsaq said, adding that on the ship, firing practice was his favourite experience.

“They understand the conditions, the harshness,” said Maj. John Doig who led the army portion of Operation Nanook.

Working with the army, the HMCS Charlottetown had to locate another unknown ship in one scenario.

“There was a vessel that was acting suspiciously somewhere in the North,” Doig said.

The boat that was acting suspiciously as part of the exercise was another navy ship called HMCS Kingston. With a strengthened hull, the smaller patrol vessel has a low-level ability to operate in ice.

When the navy, army and air force work together it’s called “joint operations,” and it takes practice, Doig said.

Canada’s disaster response to Haiti is one example of the three military groups working together, Decicco said. As Arctic shipping increases for industry and tourism, these kinds of military responses could become more prevalent, he said.

The ship wasn’t called for support in the grounding of the cruise vessel Akademik Ioffe near Kugaaruk over the weekend—but it could have been, Decicco said.

“Our job is to be ready,” said Lt.-Cmdr. Adriano Lozer, who led the morning tour on Aug. 27. “Trying to be ready. That’s the theme of the navy.”

As he led a tour through the ship, Lozer explained how to respond to a man overboard, as well as floods and fires at sea, and explained what missiles and torpedoes the ship carries.

On the bridge of the ship, tour-goers heard about navigation, vessel steering and peered out at the ocean through binoculars. Outside, they met Oscar, a dummy used for rescue practice. The crew is supposed to rescue someone within five minutes of them falling overboard, unless darkness or fog makes it much harder, Lozer said.

Below decks, they visited the operations room where—while there weren’t any windows—around a dozen screens showed what was going on in the maritime environment. For show, the specialized staff in that room wore head coverings and goggles called flash gear that would be worn when on any kind of high alert.

Tour-goers had their own new head covers—baseball caps embroidered with the ship’s name.

Filing into the Zodiac to head back to shore, one sailor reminded guests not to lose those hats in the wind, during the sunny sail back home.

Earlier, the navy took part in a community day held at the old airport in Iqaluit on Aug. 16. The crew also sent backpacks to Iqaluit filled with school supplies to be delivered to children in Nunavut.

The ship is sailing away from Iqaluit today, back to Greenland before sailing south to its namesake city, Charlottetown. 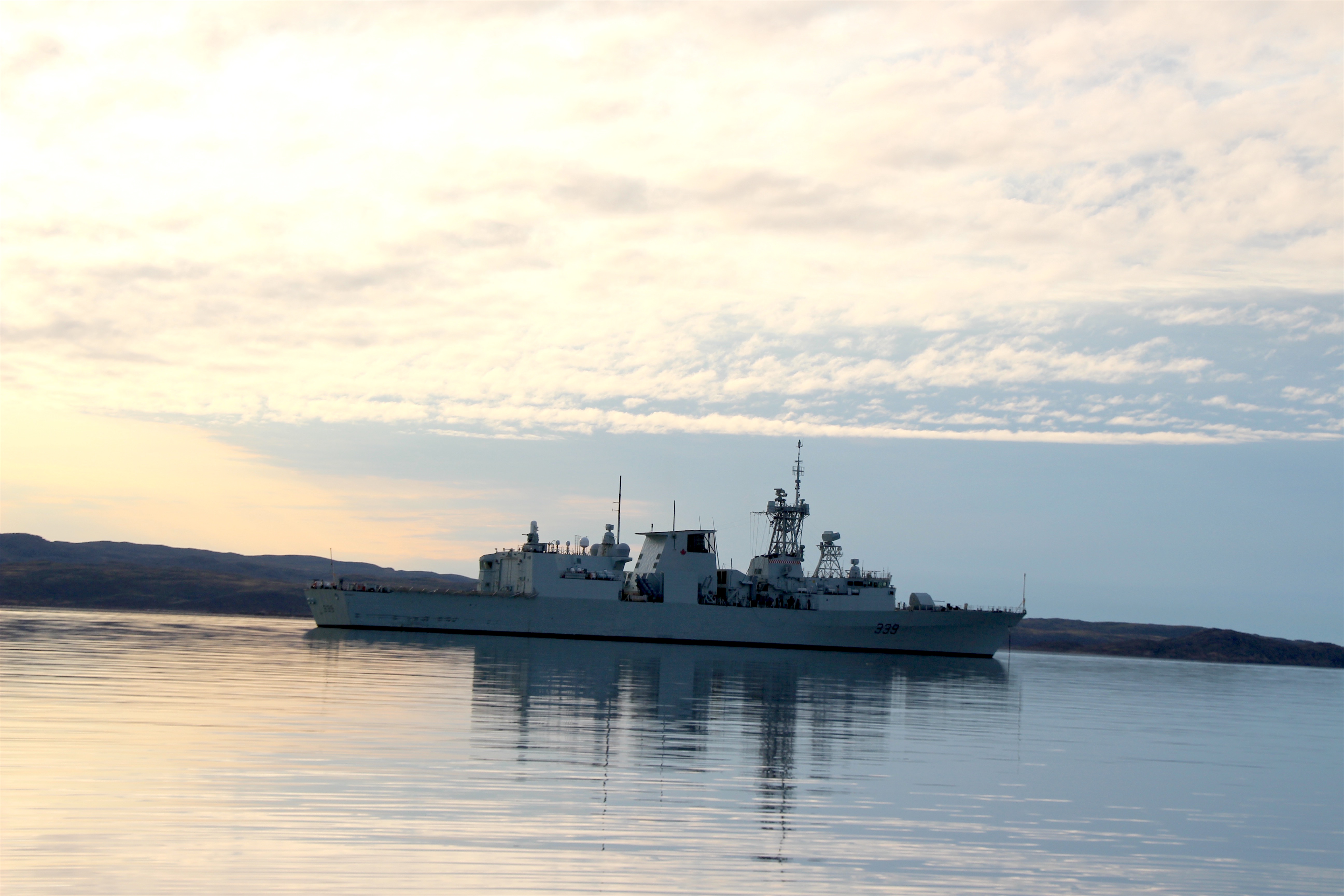 HMCS Charlottetown anchors in Frobisher Bay on Aug. 27. The Canadian warship is around 134 metres long and carries a crew of up to 200 sailors. The ship is just finishing taking part in an annual Arctic military exercise, Operation Nanook. (PHOTO BY BETH BROWN)