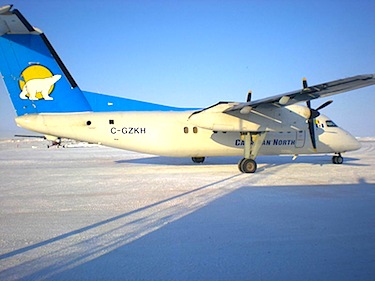 Canadian North airlines announced on Thursday, June 21, that they will offer new flights on Wednesdays between the Qikiqtani and Kivalliq regions, starting in August. (FILE PHOTO)

Flying in the morning just got a little bit easier between communities in Nunavut.

Canadian North airlines announced on Thursday that they will offer new flights on Wednesdays between the Qikiqtani and Kivalliq regions, starting in August.

The flights will link Iqaluit, Cape Dorset and Rankin Inlet and will be operated using a Bombardier Dash 8 Combi aircraft.

Canadian North says it will continually adjust the seating and cargo mix on these flights to meet customer demand, as they currently do with Combi flights.

The flights have been scheduled with early departures and arrivals, to make medical travel or business or leisure travel more convenient, a news release says.

The flights will also facilitate the movement of country foods and other freight between the two regions, via Fetchable, Canadian North’s online cargo service offered in partnership with BBE Expediting Ltd.

Canadian North will continue to offer its existing Trans-Arctic service linking Yellowknife, Rankin Inlet and Iqaluit on Mondays and Fridays.

“Canadian North is responding to customer feedback and has identified this opportunity to enhance its passenger and cargo service between the Qikiqtani and Kivalliq regions,” said Andrew Pope, vice-president of scheduled services and cargo for Canadian North.