Nelson Tagoona takes it to the next level 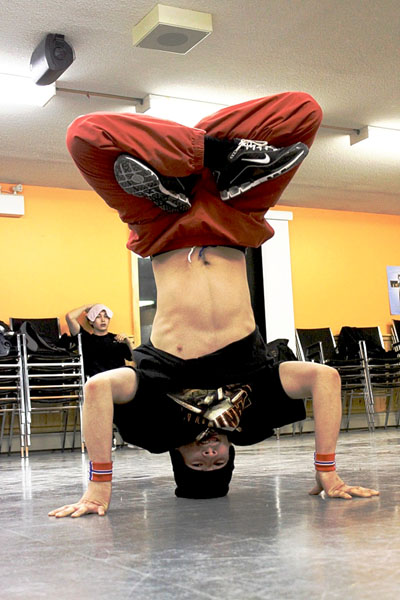 Nelson Tagoona of Baker Lake will show off his big talents at the Northern Lights Conference and Winterlude Festival in Ottawa this week. (PHOTO COURTESY OF CHRISTINE LAMOTHE)

He’s the kid from Baker Lake with the ridiculous beats, who stole the show at Aqpik Jam two summers ago, tore up the stage last year at the Cypher for Change B-boy competition in Whitehorse and blew everyone away with his throat boxing performance at the most recent Alianait festival, where he played alongside his talented cousin, Shauna Seeteenak.

He is 18-year-old Nelson Tagoona, and this weekend he’ll take the stage in Ottawa, his first large southern show, performing at the Northern Lights Conference and the Winterlude Festival — including a show on Friday in which he will play inside a giant inflatable bubble at Confederation Park.

“Nelson has taken it to the next level,” said Christine Lamothe, aka Lil’ Bear, who accompanied Tagoona to Whitehorse and has worked with him in her Iqaluit hip hop dance class, the Hip Hop Spot. “He can beat box, he can rap, he can pop, he is really just a passionate and inspired young man.”

Tagoona comes from a long line of Inuit musicians who have brewed their beats in small Nunavut and Nunavik communities, then brought their talents south and wowed the rest of Canada, and sometimes the world.

There has been Susan Aglukark, Tanya Tagaq, Lucie Idlout, Elisapie Isaac and Beatrice Deer, to name a few.

But no one has done it quite like Tagoona.

Many attribute him with inventing an entirely new category of music in throat boxing.

It melds a form of hip hop pioneered in the United States called beat boxing, in which rappers use their voices to generate lyrics and also the beat and rhythm, with the familiar plaintive and raspy ululations of traditional Inuit throat singing.

In Baker Lake, Tagoona grew up in a house on the corner of town. “It was just me and my brother and our music,” he said.

Even as a young teenager he was playing the guitar and experimenting with beat boxing but he considers his songs from that time amateurish. “It was all about love and girlfriends and blah blah blah,” Tagoona said.

Nonetheless, he played around town and began to build a name for himself in Baker Lake, winning nearly every talent show he entered.

His musical inspiration came from a wide variety of forms. He was drawn to beat boxers like Rahzel and Biz Markie but also fond of guitar virtuoso Jimi Hendrix and the early DJ, Grand Master Flash, who was born in Barbados and grew up in the Bronx, in New York City.

At the same time, Tagoona was listening to Inuit singers like Elisapie Isaac and Beatrice Deer, who were mixing traditional sounds with modern elements.

Tagoona’s first big show was in the summer of 2010, when he played Kuujjuaq’s Aqpik Jam. Afterward both Elisapie Isaac and Beatrice Deer came up to congratulate him.

“I never thought I was capable of that,” said Tagoona, “to have other big musicians be inspired by my performance, that really dropped my jaw. It felt like a dream come true.”

Cypher for Change and Alianait were also highlights.

His creative energy comes from mixing as many different sounds as he can get his hands on, stirring them together in the great cauldron that is his mind, and experimenting in whatever way he sees fit, following a thread if something seems to be working, abandoning it just as quick if the sounds aren’t coming out right. For this, there is no better setting than absolute solitude.

“You need your thinking time, your time to just practice,” said Tagoona. “I don’t speak to anyone for so long, then I realize I am not talking verbally but I am speaking to myself, and I feel that something is right, it’s connectable, it’s different, it’s unique.”

Tagoona’s success has made him something of an idol back in Baker Lake. He teaches hip hop workshops, but says much of the real teaching happens outside of these forums, when kids just approach him on their own around town.

While many Inuit youths adore hip hop, it remains alien, piped to them from some distant land through their iPod earpieces.

The lyrics are violent and abusive, and often Inuit teens think that is how all rap has to be, laments Tagoona. He tries to show that this is not the case.

“Unfortunately, there are a lot of kids who are inspired by the image of gangster rap,” said Tagoona. “Kids want to be like their artist so they do drugs all the time.”

“I try to create a positive message,” he added. “because there are so many children who are left feeling alone. I try to express unity and leadership, and build an engine inside kids so they can use music and poetry to help bring them to another level.”

Just a few weeks before he headed south for his big Ottawa debut he performed in Baker Lake with Seeteenak, who has been experiencing a buzz of her own recently, having played at the 2011 Folk on the Rocks Festival, in Yellowknife, and elsewhere.

The two cousins played a popular song of Seeteenak’s called Never Give Up, which arose out of sadness in her own life brought on by the suicide of friends and other hardships.

“My life is hard, but I’m still hangin’ on,” go the lyrics, “This world is hell, but we can change it around… Follow your dreams, what you believe you can achieve.”

Tagoona says as excited as he is about the Ottawa performance, it is shows like the one with his cousin, where he can really connect to local kids his own age, that he often feels are the most important.

“You have to believe you can do it,” he said, speaking to other Nunavut youths out there who see music as a way of life but are hesitant at just how to take it to the next level.