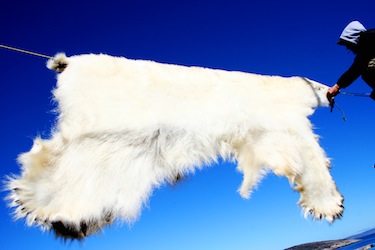 Several dozen polar bear carcasses, hunted legally in Canada, may now find their way back to the American hunters who harvested them.

The United States House of Representatives passed a bill Feb. 5 that includes a provision that would let 41 American sports hunters retrieve polar bear trophies that have been held in Canada for years.

Alaskan congressman Don Young drafted the provisions in the Sportmen’s Heritage and Recreational Enhancement Act, which allows for the importation of certain polar bear trophies taken in Canada prior to May 15, 2008 — the date when the polar bear was listed under the U.S. Endangered Species Act.

“The fact is, these polar bears were legally hunted and harvested under all U.S. and Canadian laws in place at the time of their hunt, and now these hunters have been prohibited from bringing back their trophies due to misguided restrictions and a healthy serving of Washington politics,” Young said in a Feb. 5 press release.

“Let’s be clear, a dead bear in a Canadian cold storage locker has absolutely no conservation value to anybody.”

In the mid-1990s, the U.S. Congress amended its Marine Mammal Protection Act to allow for the importation of Canadian polar bear trophies by American hunters, but this was revoked in 2008 with the listing of the bear under the Endangered Species Act.

Young claims to be the only U.S. congressman to have hunted a polar bear — in the 1960s. He began working to resolve the issue in 2009.

The provision offers a “limited fix” to two Alaska hunters and another 39 across the lower 48 states who have waited years to claim their trophies, Young said.

“This is not a discussion on the merits of listing the polar bear to the Endangered Species Act, which I believe is wrong, but a discussion about holding roughly 41 legally taken trophies hostage for political gain,” he said.

“These trophies were taken in areas with healthy and well-managed polar bear populations, to the benefit of many conservation programs and remote native villages in Canada,” he said.

“Preventing these law-abiding hunters from importing their trophies does absolutely nothing for polar bear conservation; in fact, I believe it causes more harm.”

The carcasses have been kept in Canada all these years, mostly by a taxidermist on behalf and at the cost of their U.S. owners.

If imported, Young said about $41,000 would be directed to the United States-Russia Polar Bear Conservation Fund. which oversees those countries’ shared polar bear population.

While Young’s bill has passed in the House, it must still be passed by the U.S. Senate.

Environment Canada said that, should the U.S. authorize the import of trophies, Canada will follow normal procedure set under CITES and will review the permit request when received.