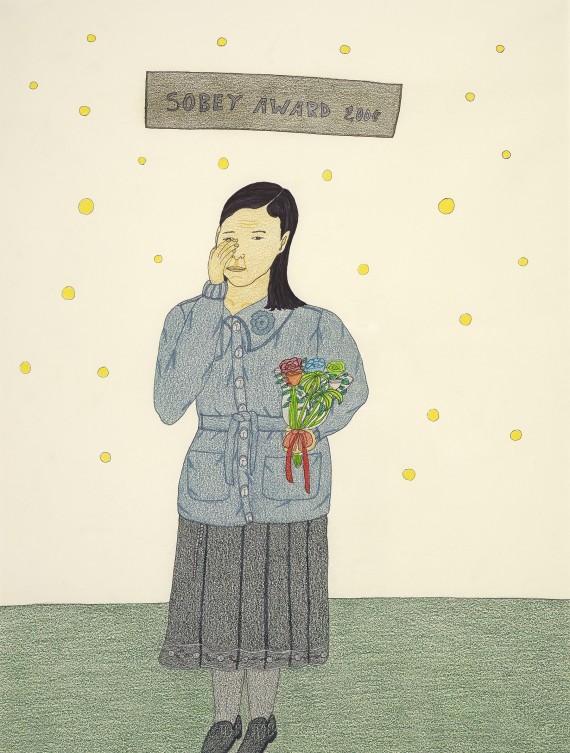 In this self-portrait, Pootoogook shows herself after winning the prestigious Sobey Art Award, which came with a $50,000 cash prize, in 2006. “They like my work, so I was happy,” she remarked at the time. (IMAGE COURTESY OF GOOSE LANE EDITIONS) 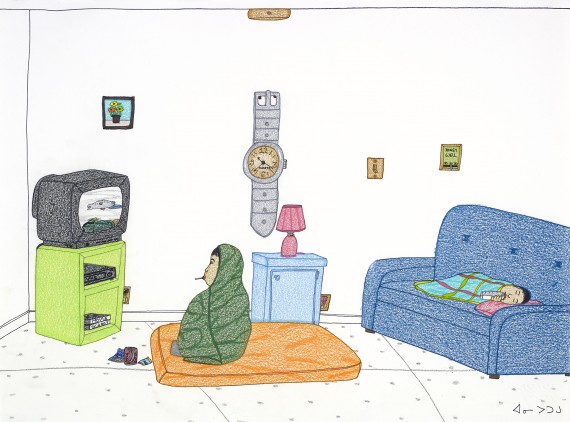 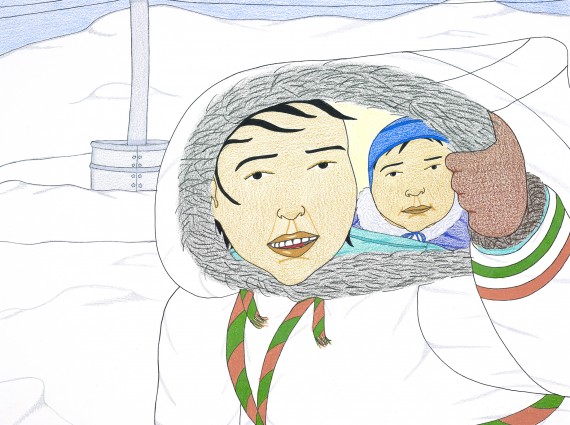 Annie Pootoogook’s Composition (Mother and Child), 2006, is one of her many drawings found in the new book Cutting Ice. (IMAGE COURTESY GOOSE LANE EDITIONS)

Cutting Ice isn’t just a beautifully packaged, representative collection of the drawings of Annie Pootoogook—although it is that.

The book, released this month by Goose Lane Editions, also helps put the life and art of the groundbreaking Inuit artist in their proper context.

That includes a succinct summary of how Inuit art arose as a commercial enterprise in Pootoogook’s home town of Cape Dorset, a biography of the third-generation artist, a look at some of the contemporaries that she worked alongside, with reflections by art experts on how Pootoogook changed perceptions of Inuit art.

The impact of Pootoogook’s artwork, which offered stark, realistic portrayals of life in the North, has been overshadowed in recent years by the suspicious circumstances of her untimely death and the allegations of institutional racism raised by the subsequent police investigation.

The book’s author, Nancy Campbell, hopes to shift the focus back to Pootoogook’s artistic accomplishments, “and tell the true story, and not just let her death be what people see,” she said.

“Really, it’s a celebration. Albeit, [her life] ended too early and sadly. But I hope that comes out, the honest story. And the pictures tell the story.”

Campbell puts Pootoogook’s drawings in the same camp as the music of Tanya Tagaq and the films of Isuma. In all these cases, they’ve helped expand and redefine notions of contemporary Inuit art.

Pootoogook’s drawings have been featured in several large-scale international art exhibits. The book credits her for “cracking the door open” for other Inuit artists to follow.

“Although her life was very short, her contribution to Canadian art history, and contemporary art history, won’t be forgotten,” said Campbell, whose PhD in art history focused on drawings by Cape Dorset artists, and who worked as a curator with Pootoogook over 15 years.

“She was really the critical player, in my mind.”

The book grew out of an exhibition of Pootoogook’s drawings that Campbell curated for the McMichael Canadian Art Collection—which, as custodian of the West Baffin Eskimo Co-operative’s Cape Dorset archive, possesses more than 100,000 artworks, mainly drawings—following the artist’s unexpected death.

Pootoogook’s body was found on the banks of the Rideau River in downtown Ottawa in September 2016. She was 47.

Prior to her death, people who knew her said she had fallen prey to her addictions and was periodically homeless, and selling drawings for a pittance.

The investigation into Pootoogook’s death, which police described as suspicious, was marred by online comments made by the Ottawa Police’s lead investigator for the case, who wrote that “much of the Aboriginal population in Canada is just satisfied being alcohol or drug abusers.”

He received a temporary demotion and later expressed remorse for the hurt caused by his comments.

When Campbell visited Cape Dorset to ask those who knew Pootoogook what they would like to see included in a book, she said what she heard was best put by elder Jimmy Manning.

“He said, ‘Make sure to also talk about the good things in Annie’s life. She loved Cape Dorset. She loved hunting, fishing and berry-picking. She was really good at school. She was really smart. She graduated from high school. Her life had a lot of problems and sad moments, but there are good moments too.’”

“I was very conscious to not just show the alcohol abuse or the beatings,” said Campbell. “Those are in there. But she also did some really beautiful and funny pictures.”

The book also notes that many in the community believe that Pootoogook would have fared better, had she returned to Cape Dorset after winning the prestigious Sobey Art Award—the top art prize for young Canadian artists, which comes with a $50,000 prize, in 2006—rather than living in the South.

“Perhaps she would have benefited from community life,” Campbell writes. “Unfortunately, her tragic and untimely death is the sad result of systemic social issues, mental health issues, and abuse that complicated and haunted her entire life.”

Campbell and others who championed Pootoogook’s art knew she had hit on hard times during her final years, but they had hoped she would pull through. “We were hoping and praying for her to be able to sort things out, but she was a really damaged individual before she went South,” she said.

Pootoogook portrayed the often uncomfortable realities of life in Canada’s eastern Arctic. As Heather Igloliorte, an Inuk professor in art history with Concordia University, wrote for the book:

“Her art challenged viewer expectations of igloos and dog teams and instead revealed our ‘matchbox’ houses, laminate-floored and sparsely decorated; the Northern Store with its refrigerators lined with freezer-burned frozen dinners; the quiet activity of the print shop; or lazy afternoons spent watching trashy daytime television imported from far away … Her images de-exoticized the Arctic. Yet, at the same time, they highlighted how little the South truly knows about the experience of life in the North.”

“Appreciating modern Inuit art helps us move beyond the old colonial lens, when Inuit were seen as belonging to a distant past, living outside the present … Acknowledging the vitality, relevance and importance of modern Inuit art is also a tacit acknowledgement that both Inuit and non-Inuit live in a shared world, experiencing a shared present, occupying a shared globe.”

“I tried to show how they’d all riff off each other,” said Campbell.

Cutting Ice is available in bookstores and from the publisher’s website for $45. The book’s essays are published in English and Inuktitut.