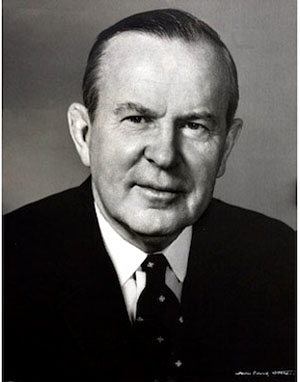 Lester B. Pearson. A new book about the history of Canada’s territorial claims in the Arctic has shed fresh light on the impressive, behind-the-scenes manoeuvring by Canadian officials in the 1920s to secure control over the vast region and its untapped resources — a key part of the current Conservative government’s vision of Canada’s economic future.
(FILE PHOTO)

A new book about the history of Canada’s territorial claims in the Arctic has shed fresh light on the impressive, behind-the-scenes manoeuvring by Canadian officials in the 1920s to secure control over the vast region and its untapped resources — a key part of the current Conservative government’s vision of Canada’s economic future.

And among the public servants identified for the first time as helping to resolve Canada’s last significant territorial dispute in the Arctic is a young foreign affairs officer who would go on to much greater fame — including a Nobel Peace Prize — for his diplomatic deftness: future prime minister Lester B. Pearson.

The book, Acts of Occupation: Canada and Arctic Sovereignty, 1918-25, was co-authored on their off-hours by Janice Cavell, a historian with the federal Department of Foreign Affairs, and Canadian War Museum historian Jeff Noakes.

Their research, based in part on previously untapped archival material, details the thorny relationship between Canada’s self-promoting Arctic explorer Vilhjalmur Stefansson and the influential federal bureaucrat J.B. Harkin, a central figure in the Canadian government’s first major push to assert sovereignty in the North.

The authors reveal a back-channel struggle between Stefansson and Harkin over securing credit in the eyes of future historians for their respective roles in awakening Canadians to the importance of the Arctic and in thwarting perceived threats to this country’s northern sovereignty from other polar countries, particularly Denmark.

Cavell and Noakes argue that both men overestimated the seriousness of that threat.

Stefansson had a “tendency to mislead people,” Noakes told Postmedia News on Tuesday, but his lobbying “sparked the reactions to supposed threats to Canada’s Arctic sovereignty” by government officials.

Stefansson — a grandstander who nevertheless made significant discoveries, such as Meighen, Borden and Brock islands — is credited with spurring Harkin to ensure that significant “acts of occupation,” such as police patrols on Ellesmere Island, were undertaken to bolster Canada’s territorial claims in areas of potential dispute.

“By 1925, Canada’s haphazard Arctic policy had been transformed into something much more clearly thought out,” the authors state. “Canadian officials knew exactly what they wished to claim and how, and they had defined the boundaries within which they intended to work.”

It was during this time that the “sector principle” came to clearly underpin Canada’s claims in the North. The controversial doctrine held that any land falling between the western boundary of the Yukon and the eastern boundary off Baffin and Ellesmere islands — with each of those lines extended all the way to the North Pole — constituted Canadian territory.

By the end of the 1920s, only one significant area of disputed land remained in the entire Arctic archipelago north of mainland Canada. And it was Pearson, a relatively new recruit to the federal government’s External Affairs Department, who helped ensure that Canada — and not Norway — would have sovereignty over three large islands (Axel Heiberg, Amund Ringnes and Ellef Ringnes islands) first charted by Norwegian explorer Otto Sverdrup.

While the three islands west of Ellesmere fell well within the area defined by Canada’s sector-principle claim, Norway was preparing to mount a counter-claim based on Sverdrup’s discovery of the islands, which are uninhabited but have a combined area nearly as large as New Brunswick.

Enter Pearson, who was asked to analyze and write an opinion on the issue. His advice, contained in an October 1929 memo unearthed by Cavell and Noakes and identified by Pearson’s “LBP” insignia, was that the sector principle and Canadian activity in the region gave a solid foundation to Canada’s claim over the so-called “Sverdrup Islands.”

But he also advised that it would be sensible to offer a cash payment to Sverdrup to quickly secure clear title to the lands “rather than carry on a long argument in the matter, which would eventually have to go to arbitration.”

Pearson suggested that “a grant might be made to Captain Sverdrup of grace, not of right, in return for which, though not as a quid pro quo, Norway might acknowledge the disputed islands as Canadian territory.”

That, in fact, became Canada’s strategy in dealing with the matter, which was resolved in 1930 when Sverdrup accepted a $67,000 payment — ostensibly in exchange for his maps and other records related to his discoveries — and Norway formally acknowledged Canada’s ownership of the islands.

Apart from the relatively minor and ongoing dispute with Denmark over tiny Hans Island between Ellesmere Island and Greenland, the resolution of the Sverdrup Islands controversy in 1930 represents a historic achievement for Canada, eliminating the last serious doubt about the country’s sovereignty over lands it claimed to control.

“Journalists greeted the agreement as evidence that Canada had entered ‘a new stage in international relations,’ ” the authors noted, “and the perception that the External Affairs bureaucracy had attained a new level of maturity and competence was well warranted.”

At the time, Canada was still struggling to assert its own, independent foreign policy after a full half-century since Confederation spent largely under British authority when it came to international relations.