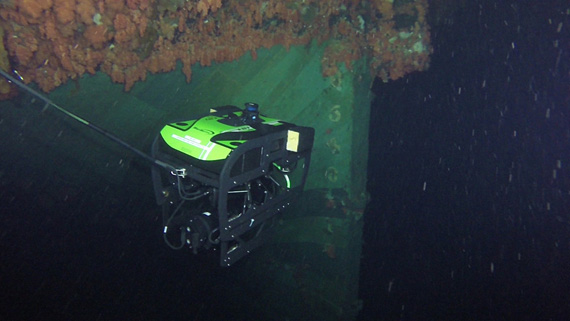 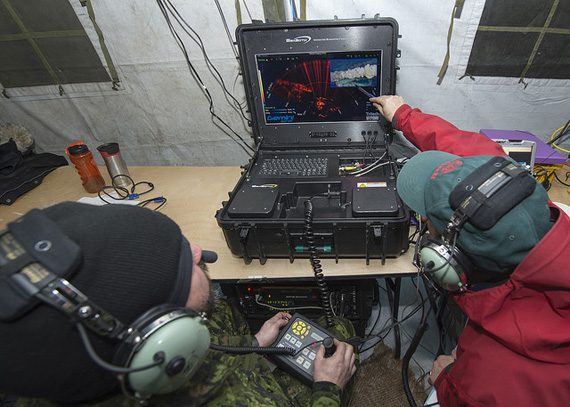 Rare new footage of the Breadalbane, a merchant ship sunk in the High Arctic, has emerged from a Canadian Armed Forces diving operation.

The HMS Breadalbane, built in Glasgow, Scotland in 1843, was sent to supply ships involved in the search for Captain John Franklin’s lost expedition.

But in 1853, the three-masted ship became trapped in packed ice and eventually sank in the Barrow Strait near Beechey Island, at southwest of Devon Island and about 100 kilometres east of Resolute Bay.

Although the cite has previously been explored and declared a National Historic Site, the Canadian Armed Forces latest dive operation has produced the clearest images of the sunken ship to date.

As part of Operation Nunalivut 2014, an annual High Arctic training exercise, the Royal Canadian Navy Fleet Diving Unit teamed up with Parks Canada, the Government of Nunavut and SeaBotix Inc. to capture HD footage of the wreck.

The remotely-operated camera navigates the ship, showing clear visuals of a barnacle-covered anchor, as well as the vessel’s hull and stern.

“Six days of diving with remotely operated vehicles this year have given us an up-to-date view of an incredible wreck that preserves a moment of time in Canadian history,” said Jonathan Moore, an underwater archeologist with Parks Canada, in a Government of Canada news release.

“We’ve learned a huge amount about the wreck during this project, and it’s rare to have such a detailed view of a shipwreck from 1853,” he said. “We anticipate more discoveries and insights as we pore over the collected information.”

The entire archive of footage will be preserve by both Parks Canada and the GN.

Little was known about the shipwreck’s condition until 1980, when Dr. Joseph MacInnis led an expedition to Beechey Island, locating the Breadalbane, which he described as “a pale ghost beneath the ice.”

The Breadalbane was one of a number of ships sent to re-supply search parties that spent the early 1850s looking for traces of Sir John Franklin’s two missing ships.

The Erebus and Terror had departed England the summer of 1845 with a crew of 145 men aboard, with plans to discover the Northwest Passage. But the ships encountered ice and were forced to winter off the coast of Beechey Island.

The following spring, Franklin and his men continued southwest, until the later summer, where the ships were once again caught in ice to the north of King William Island.

The crew remained there until 1848, when the vessels were finally abandoned. The remaining crew headed south towards the mainland, although none lived to tell their tale.

Parks Canada continues its search for the Erebus and Terror, which are thought to be close to the community of Gjoa Haven.

You can view some of the footage at this link here.