“When people want help they don’t care which department” 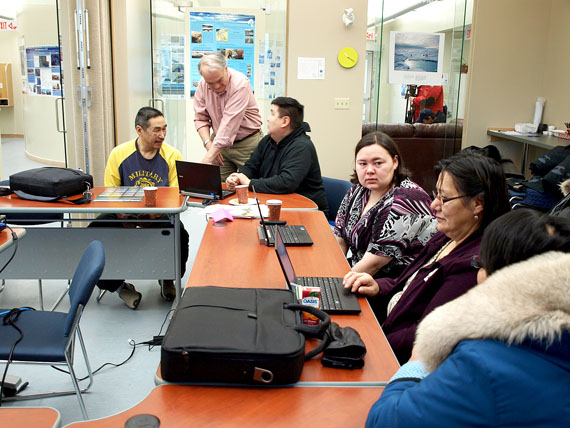 Hugh Lloyd (standing), director of the GN’s government liaison office, with new GLOs Jan. 27 in Iqaluit. The GLOs are to act as first contacts throughout the territory for Nunavummiut who want to gain access to government programs. (DEAN MORRISON)

Government liaison officers have been reinstated in eight communities across Nunavut to improve communications between the Government of Nunavut and people living in small communities.

The program operated in one form or another for more than 20 years until it was disbanded around 2008, said Hugh Lloyd, director of the GN’s government liaison office.

But reinstating the program became a top priority for the GN after it saw the results of Qanukkanniq report card, released on Oct. 1, 2009.

The report, conducted by North Sky Consulting, a group led by Piers McDonald, a former premier of Yukon, found an overwhelming number of people who found it difficult to impossible to communicate with the government.

“More than anything else, Nunavummiut said that communication with their government is very poor… When they think they know who to phone, nobody answers,” the North Sky report said.

The GN first focused on putting GLOs into smaller communities with the least government services.

So far, it’s hired eight GLOs and has put another six GLO jobs up for competition, with the eventual goal of hiring GLOs for every Nunavut community.

All GLOs must be fluent in English and Inuktitut — and they’re tested to ensure they’re functionally bilingual.

GLOs visited Iqaluit for a conference held between Jan. 24 and Jan. 27, to network with each other and to hear presentations from other government agencies, such as Service Canada.

Although the GLOs are territorially administered employees, their role is to act as liaisons between municipal, territorial, and federal levels of government.

“Just imagine if your mother was in a tuberculosis hospital when you were born,” Lloyd said, giving a typical scenario.

“You were given a Manitoba birth certificate that includes your disk number as your last name. Your birth certificate calls you Johnny E5726. You are now into all sorts of jurisdictions. You are into Manitoba, the Catholic Church, the NWT, because that was where you lived before your mother went to the hospital, and you are now in Nunavut, so these things can be quite challenging for people.”

Rebecca Qulitalik, a GLO in Pond Inlet since this past August, who has lived in Pond Inlet for 22 years, says her work with the GN’s department of the Environment is serving her well in her new position.

“I have helped quite a few elders with applications for CPP and their old age security,” Qulitalik said. “I have also helped people applying for employment insurance who didn’t know what to do with their records of employment.”

Qulitalik said she looks forward to the challenges her job will bring.

She said she’s happy to offer a friendly face on behalf of what often looks like a tangled bureaucracy.

“When people want help they don’t care which department or level of government it comes from. They just want answers,” Qulitalik said.