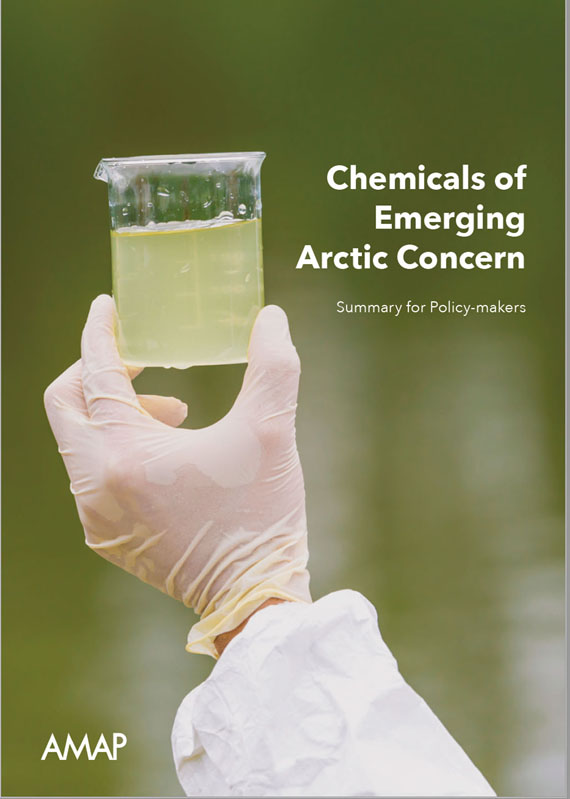 The Arctic Monitoring and Assessment Program, known as “AMAP,” says a variety of chemical contaminants are entering Arctic ecosystems, sparking new concerns about their effects on the health of humans and wildlife.

Newly discovered industrial poisons are entering the Arctic food chain, but scientific researchers don’t know enough about them to figure out which ones are harmful and which ones need regulation, an Arctic Council monitoring group said April 25 in a report.

“There is a general lack of information with regards to the extent to which emerging chemicals may be taken up and accumulated by Arctic fauna or indigenous Arctic peoples whose diets depend heavily on local wildlife,” said the report, issued by the Arctic Monitoring and Assessment Program, known as AMAP.

In the early years of the Arctic Council, in the 1990s, the monitoring of POPs, or persistent organic pollutants, was the main focus of AMAP’s work on behalf of the eight-nation Arctic Council.

AMAP’s work at the time played a big role in bringing about the Stockholm Convention on Persistent Organic Pollutants, which was signed in 2001 and given effect in 2004.

At that time, contaminants such as PCBs and DDT, in use since the 1940s and 1950s, were carried by winds and water currents from industrialized regions in the South to the Arctic, where they ended up inside the bodies of marine mammals like seals and polar bears.

Humans who eat marine mammals were affected too. High levels of PCBs were turning up in the bodies of Inuit women of child-bearing age.

But in recent years, the Stockholm Convention has reduced the presence of those legacy contaminants, many of which are associated with infertility and cancers.

The problem now, however, is that many new chemical substances, similar in behaviour to the original group of POPs, are now in use.

“Tens of thousands of chemicals are presently on the market and new substances continue to enter commerce each year,” AMAP said.

Though many of these chemicals are recent inventions, some are substances that have been around for decades but have only been discovered recently in the environment through the use of new analytical techniques.

Though some have been added to the Stockholm Convention’s lists, regulators struggle to keep up with them.

“Improved analytical technologies, research and screening programmes continue to reveal the presence of chemicals that have previously gone unnoticed, or were not expected to be present in the Arctic,” AMAP said.

Another new revelation is that some new contaminants originate not in the South, but from Arctic communities.

“Inadequate wastewater treatment in particular seems to be a source of some pharmaceuticals and chemicals used in personal care products, as well as other chemicals found in household products such as some siloxanes and phthalates,” AMAP said.

Some of the chemicals of emerging concern are:

• PFSAs, which are used as stain repellents in textiles and carpets and in the manufacture of Teflon and which accumulate in blood and organs such as the liver;

• new brominated flame retardants, which have been found in air, water and wildlife throughout the Arctic;

• chlorinated flame retardants, which have been found in reindeer, seabirds, seals, beluga and polar bears;

• organophosphate flame retardants, which have been found throughout Arctic ecosystems in fish, seabirds, seals and polar bears;

• plastics and microplastics, which can cause adverse effects in animals that consume them;

• pharmaceuticals and personal care products, which include antibiotics, anti-depressants and other medicines, as well as fragrances and cosmetics; and

• phthalates, which are used to make polyvinyl plastics and are found near populated areas, which suggests they are released from communities.

But AMAP says the effects of many of these chemicals on wildlife and humans is unknown, as well as the full extent of contamination in the Arctic.

So because of the evolving potential threat that they pose, AMAP recommends that the Arctic Council look at new approaches to the management of chemical contaminants in the Arctic.

To that end, AMAP will present a scientific report at the big Arctic Council ministerial gathering to be held May 10 and May 11 in Fairbanks, Alaska.

At the meeting, the chairmanship of the United States at the Arctic Council will come to an end and Finland will assume the chair.

Chemicals of Emerging Arctic Concern by NunatsiaqNews on Scribd