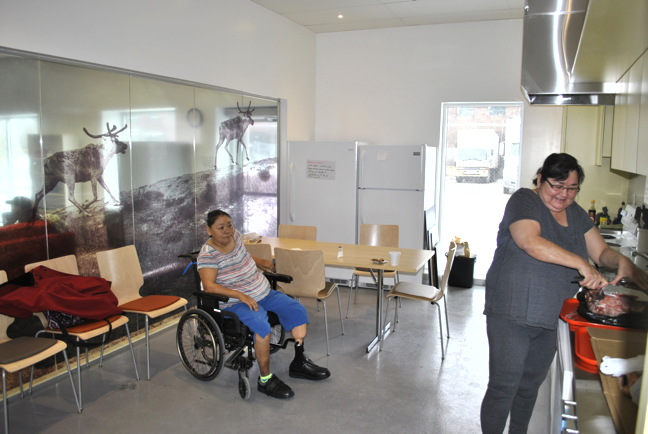 The country food room at the Ullivik patient home in Dorval, Quebec, allows guests to prepare and share traditional Arctic foods. An image of caribou trotting through an Arctic landscape faces the counter. (PHOTO BY PETER VARGA) 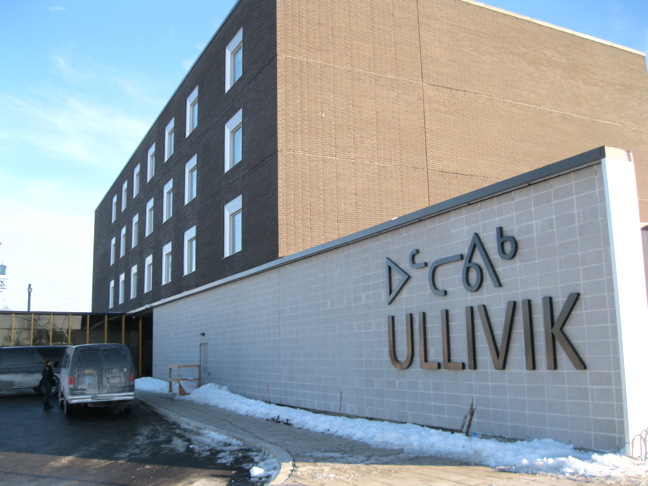 The Ullivik boarding home for medical patients of Nunavik, which opened Dec. 11, is conveniently located near the Montreal airport. (PHOTO BY PETER VARGA) 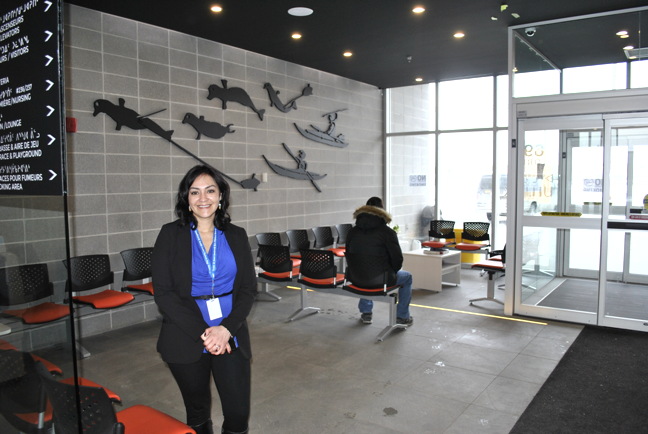 Inuit designs by the Avataq Cultural Institute adorn the walls and hallways of the Ullivik patient home in Dorval, Quebec. Director Maggie Putulik, above, oversees the newly-built facility, which is routinely filled to capacity. (PHOTO BY PETER VARGA)

MONTREAL—Medical patients from Nunavik finally have a new place to stay when they travel to Montreal for treatment.

Ullivik, which means “a place to stay” or “place to wait” in the Inuit language, opened to patients from Quebec’s 14 northern-most communities on Dec. 11.

Built from the ground up near the patients’ point of arrival at Pierre Elliott Trudeau International Airport in the suburb of Dorval, the Ullivik patient home has 91 bedrooms that contain 143 beds for patients and their medical escorts.

Located on Orly Avenue just off Highway 520, the four-storey complex has a sprawling ground floor with offices, a cafeteria, lounge areas and spacious rooms for conferences, family gatherings and cultural activities.

Ullivik, planned and designed under the direction of the Inuulitsivik Health Centre, accommodates Nunavimmiut patients during their stays for specialized medical treatment at hospitals and health facilities in Montreal.

And the facility includes features to make Quebec Inuit feel at home.

“We designed it to meet the needs of our clients, and also to accommodate their traditional practices, such as eating country food,” said Maggie Putulik, the director of Ullivik.

A country food room, equipped with freezers and a stove, allows residents to eat caribou, seal and other traditional foods harvested from the Arctic as they would in their home communities.

A craft room, which doubles as a chapel, provides a well-lit space for sewing and carving.

Construction of Ullivik began in the fall of 2015. Employees started moving into their new offices on Dec. 9, Putulik said.

“We’re very proud of our new facility,” she said. “There was a lot of work and thought put into this building, based on the needs of our clients.”

Ullivik marks a major improvement in accommodation for Nunavik medical patients. Until the centre opened, the Northern Quebec Module, which manages patient accommodations, housed Nunavimmiut patients at a YMCA residence located in a troublesome area near the city’s downtown core.

“That was just dreadful,” Putulik said. “The location we were at before, downtown, right in front of Cabot Square—the core of the homeless, both Inuit and non-Inuit, were preying on our client’s vulnerability.”

A boarding home that hosted Nunavik patients for more than 10 years in the Notre-Dame-de-Grace borough of Montreal just before the YMCA was no less troublesome.

A potential location at a former hospital in the Villeray borough of Montreal fell through in 2010 after the Nunavik Regional Board of Health and Social Services heard borough officials’ concerns that Inuit guests would actually increase criminal activity in the area, said Putulik, who worked as an interpreter for the health board at the time.

“It was really, really nasty,” she recalled.

With a mandate from Quebec’s department of health and social services, the Nunavik board and Inuulitsivik Health Centre put out a call for tenders for a brand new facility in 2014.

The winning bid went to a real estate company that offered a site in Dorval at a location that is walking distance—or a short drive—from the Montreal airport. The Northern Quebec Module and regional health authorities approved construction of the $15 million facility in August 2015.

The City of Dorval welcomed the project, as it would replace an unused building on a derelict lot with a brand new facility. Ullivik, the successor to Northern Quebec Module, is renting the new building from the Montreal-based real estate management firm Moschelle on a 15-year lease, at $2.5 million per year.

Dorval has long been a first point of reference for Inuit of Northern Quebec who come south, so most Nunavimmiut know the surroundings very well already, Putulik said. The city’s mayor and council have also given a warm welcome to the Inuit community, she said.

Although the Ullivik patient home seems to be the perfect solution to all difficulties involved in accommodating Inuit patients in Montreal, Nunavik health administrators point out that the new facility can’t accommodate all patients. In fact Ullivik filled to capacity the first day it opened.

For now, the home accommodates patient overflows at a neighbouring Comfort Inn hotel.

“The very first day we moved our clients (from the YMCA), we had to rent nine rooms at the hotel across the street,” Putulik said. “The number of arrivals we take is increasing every year.”

Almost 7,000 patients from Nunavik went to Montreal for treatment last year, up from about 6,000 the year before. The count includes medical escorts and multiple visits by the same patient.

Putulik expects arrivals to increase by 800 to 1,000 per year in the near future, largely because of Nunavik’s rapid population growth.

Minnie Grey, executive director of the Nunavik Regional Board of Health and Social Services, says the only way to reverse this is to provide specialized care in Nunavik itself.

“Our plan is to work with the government (of Quebec) to build a better health infrastructure in the future,” Grey said. “Building bigger in Montreal and just sending people south is not our goal.”

“We spend millions and millions of dollars on transporting patients south. So why not invest in better and more services here in Nunavik?”

A regional hospital for Nunavik could accommodate more specialized medical services in the region, Grey said.