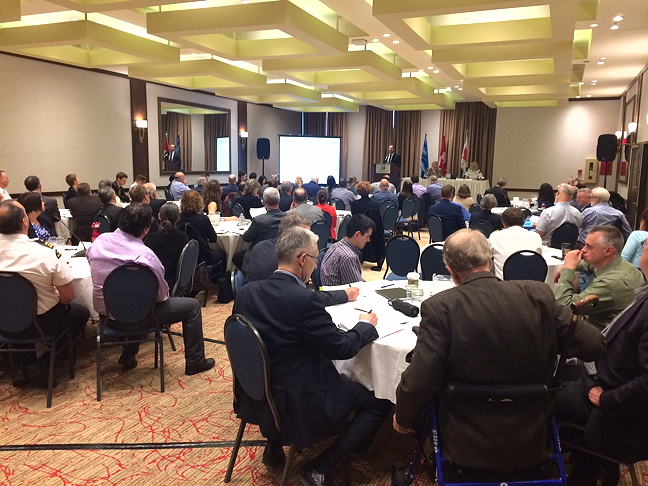 World Wildlife Fund Canada released its nautical wildlife maps of Hudson Strait at a meeting of the Canadian Marine Advisory Council in Montreal, above, May 25. (PHOTO BY ANDREW DUMBRILLE) 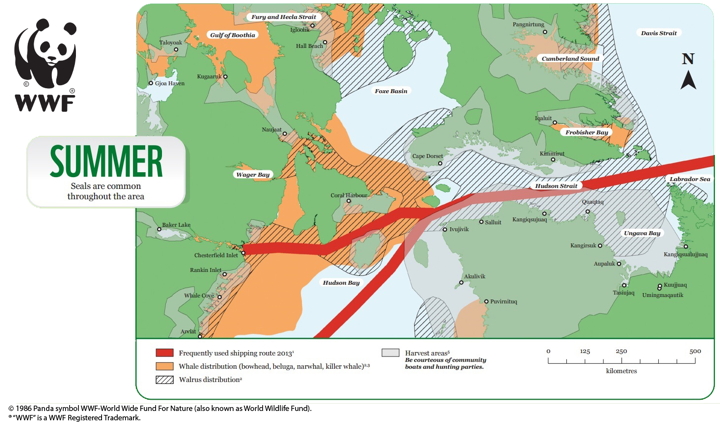 As the Arctic’s sea ice continues to hit historic lows and more vessels clog Northern shipping lanes, the World Wildlife Fund-Canada is reminding pilots to mind their neighbors on the high seas, in the first of a series of maps from the organization identifying ecological habitats.

WWF-Canada unveiled its Hudson Strait Mariners Guide during a meeting of the Canadian Marine Advisory Council in Montreal, May 25.

“This is an opportunity to create a high standard for sustainable shipping practices before we see a major increase in activity in the Hudson Strait due to longer open-water periods,” said WWF-Canada’s senior specialist for sustainable Arctic shipping, Andrew Dumbrille, in a news release.

Currently, the Hudson Strait is one of the only regions in Nunavut that has regular winter shipping.

The map points out areas that whales, seals, polar bears and walrus are known to frequent during the summer and winter seasons, and is the first in a series of nautical maps around the Arctic that will be rolled out in the coming years as commercial shipping in the North, and Nunavut, grows.

Ecological information for the maps came from publically available data, but also incorporated input from social media and community consultations, as well as the Draft Nunavut Land Use Plan, Dumbrille told Nunatsiaq News by phone from Montreal.

WWF-Canada eventually wants to upload the map’s information to the main charts published by the Canadian Hydrographic Survey.

In the meantime, Dumbrille said his organization is working on an App for users to plot their courses using the data, and digitizing the data.

“This is the beginning of a larger project to more fully embed environmental information into voyage planning and navigation in the Canadian Arctic,” he said.

Guides for Lancaster Sound and the Beaufort Sea will be released over the next couple of years, WWF-Canada said.

Given the possibility of expanded shipping through Lancaster Sound from the Milne Inlet port, which serves Baffinland’s Mary River iron mine, Dumbrille says compiling a map for that area will take priority for WWF-Canada over the next year.

“For Milne [Inlet] and Eclipse [Sound] the potential for winter shipping is there. We haven’t seen it yet, but it’s anticipated in years to come,” Dumbrille said.

“Its really pressing that we need a mariners guide for that region.”

High volumes of shipping traffic produce noise that can disrupt feeding patterns for marine animals, as well as disrupt communication and wayfaring for mammals such as whales.

“This guide should be on every ship that passes through the Hudson Strait,” said Fednav’s director of government affairs and sustainability, Marc Gagnon in a May 25 statement.

“These kinds of tools go a long way to making sure our shipping practices only add value to northern communities.” 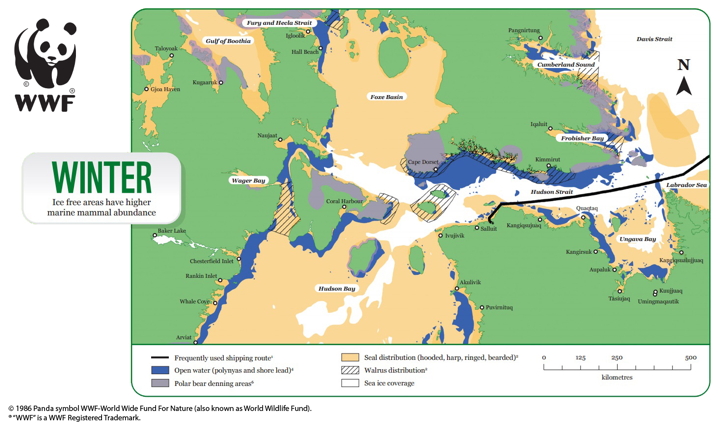