“We have all the support we need now,” new president says 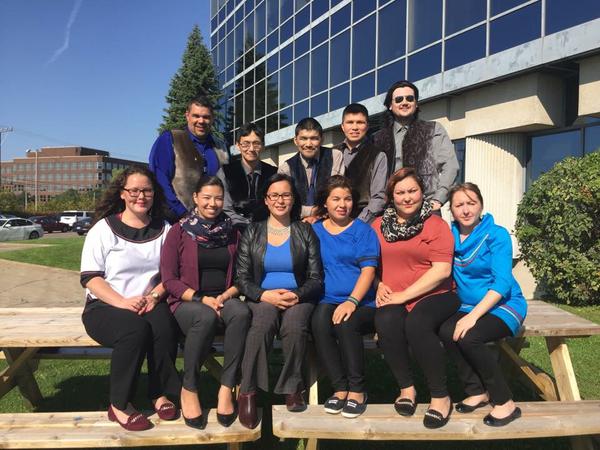 The head of Nunavik’s new youth association says mental health awareness and Inuit cultural values will sit at the top her agenda over the next three years.

But the rest of the association’s work will be guided by Nunavik youth themselves, Alicia Aragutak says.

Aragutak, the former director of Tursujuq national park, was acclaimed as the Nunavik Youth Forum’s president earlier this month.

“I left a really great job, something I could have set my career on,” said Aragutak. “But I have the heart and the drive to be in politics. I felt I could give more to the region as part of this organization.”

At 24, Aragutak already has a lengthy resumé; apart from her role at Tursujuq park, she’s worked as a management trainer for the Fédération des cooperatives du Nouveau-Québec (FCNQ), sat as a municipal and regional councillor and established a community kitchen in her home community of Umiujaq.

But it was while sitting on a Parnasimautik working group in 2013 when Aragutak realized that Nunavimmiut youth had little representation, and plenty of issues worth addressing.

The new youth forum has a smaller board of directors, with coastal, rather than community representatives.

But its mandate remains the same — to represent and advocate for Nunavimmiut aged 15 to 35 at both the regional and community levels.

But to ensure the new organization is responsive to the region’s needs, Aragutak’s first goal is to host consultations on either coast this winter.

“We looked at ways to reach out to all Nunavik communities, to make sure we’re including all youth,” she said. “We’d like them to have a big say in what our youth association does.”

Following the lead of Quebec’s youth secretariat’s work in southern regions, the new group will develop its own Inuit youth policy to inform its future activities.

But the organization is still building itself from scratch; its new directors just completes governance training in Montreal.

Next the association will hire three staff members, an executive director, project manager and an office clerk, to be based in Kuujjuaq.

While the new youth forum is considered its own entity, it is overseen by Makivik Corp., which is providing operational resources to the group.

The Quebec government agreed to re-instate the association’s core funding only if it is integrated under a regional organization and re-established its board of directors.

“Youth were really frustrated with not having an association,” Aragutak said. “I’d like to reassure them that we have all the support we need now. It’s really unfortunate that the last association didn’t have that.”

“But we’ve started off on a really good path.”

The youth association is now looking for a name; Nunavimmiut youth can submit their ideas for an Inuttitut name to the organization’s vice-president Louisa Yeates at louisayeates@gmail.com.