“There’s a lack of basic financial information, not just in Nunavut, but everywhere” 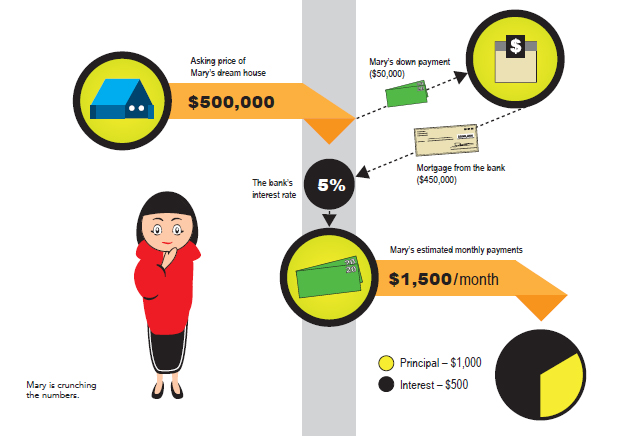 Simonsen explains the process of buying a home using a character named Mary, 23-year-old Iqaluit mother who works for the GN—a character Simonsen says is a composite of many Nunavummiut he knows. (IMAGE COURTESY OF T. SIMONSEN)

Thor Simonsen had recently become a home owner when, in 2014, a co-worker asked him for some advice on how to start the process of buying her own house.

The Iqaluit music producer and entrepreneur started to jot down a few notes for his colleague, starting with basic information on banking and down-payments.

“It took longer than I expected,” Simonsen said.

That’s no surprise; he describes his own experience buying a home in Iqaluit as impromptu. Simonsen learned about it as he went; only discovering the Nunavut Housing Corp.’s down-payment assistance program two weeks before the sale closed.

Explaining the process to his colleague made Simonsen realize that Nunavummiut could probably benefit from a basic guide on how to approach home ownership.

Three years later, Simonsen, 29, has launched just that: How to Buy a House in Nunavut: The Ultimate Guide for Future Homeowners in Nunavut.

The 30-page guide, written and illustrated by Simonsen, promotes home ownership as a viable option for just about any wage-earning Nunavut resident.

“You don’t need to have a fancy education or a lot of money; in fact, sometimes these things make people too cautious to buy a house, and they refuse to accept the ‘risks’ involved,” he writes.

“Owning a house is very doable, but it does require a stable lifestyle, ambition, self-discipline and time.”

Simonsen makes a strong, possibly overly-optimistic, pitch for home ownership as a secure investment; with a young population and a booming economy, he believes real estate in Nunavut will continue to rise in value for years to come.

He walks readers through the process by way of Mary, a fictional 23-year-old who works as a receptionist for the territorial government in Iqaluit—a character Simonsen says is a composite of many Nunavummiut he knows.

Simonsen’s calculations are simplified—gathered after speaking to bankers, lawyers, real estate agents and other home-owners—but do provide readers with the basics on how to crunch the numbers to determine what they can afford, and what government programs are in place to help.

“The book is not about how to make a tonne of money,” Simonsen noted. “It’s how to become more financially stable and how to build inter-generational wealth.”

That was passed to him through his European family’s own long history of home ownership. In Nunavut, however, only one in five people live in their own homes.

“There’s no history of it,” Simonsen said. “And it can be really complicated. There’s a lack of basic financial information, not just in Nunavut, but everywhere.”

A Kindle version of How to Buy a House in Nunavut is now available at Amazon.ca

But Simonsen has approached some private organizations and Government of Nunavut departments for sponsorship, which he hopes to secure in order to publish a print version of the guide in English and Inuktitut.

His long-term goal is to use the guide to teach financial literacy to Nunavummiut youth, he said, possibly through the territory’s school system.