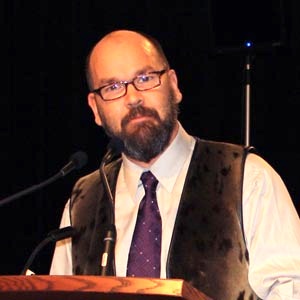 For Robbie Watt, March 6 was a turning point.

That’s the day the 46-year-old Inuk — who first came out as a homosexual almost 20 years ago — feels like he came out once again.

It’s time, he said, to change negative attitudes about homosexuality in many Inuit communities.

Watt was reacting to comments made earlier this week by Nunavut Tunngavik Inc. president Cathy Towtongie, when she “commended” an Iqaluit city councillor for speaking out against the raising of a rainbow flag last month.

As criticism of her comments mounted, Towtongie refused to apologize, saying instead that Nunavummiut need to “openly discuss the issue of sexual orientation.”

That’s what Watt has already started doing. By the end of the day, he had created a Facebook page for the lesbian, gay, bisexual, transgender and queer community in the Arctic, which quickly amassed more than 250 followers.

“If they want to have a debate, I’m ready,” Watt said. “I’m ready to fight to make sure for once and for all that we belong to this society. We’re part of this human fabric.”

Watt said Towtongie’s comments speak to more widespread homophobia in many Inuit communities, but her comments were also personal to Watt, who works for NTI’s counterpart in Nunavik, Makivik Corp.

“I’ve worked side by side with Cathy, she told me she was my friend and then she goes on to condemn me,” he said. “So yesterday, I said ‘no more.’”

Staying silent on the issue would only foster more prejudice against the LGBTQ community in regions like Nunavut and Nunavik, Watt said. His Facebook page is a way of re-affirming his own comfort in his homosexuality.

The timing was right, he added, in a region where there are really no services for gay and lesbian Inuit.

“We’re losing a lot of good people to this ignorance,” Watt said. “There are many individuals who have ended their lives because they felt different, they felt ashamed, they had no support.

Watt knows the debate around homosexuality does not come easily in the North, where he believes fundamental Christianity has had a huge and often negative impact on Inuit notions of morality.

Watt himself came out almost by accident 18 years ago, he said, while attending an AIDS conference in Iqaluit. Media covering the conference broadcast the message from the then 28-year-old university student, which spread across Nunavut and to Watt’s family living in Kuujjuaq.

“I had to fly through Kuujjuaq on my way back to Winnipeg, and some people couldn’t even shake my hand at the airport,” he recalled.

“It took a few months [before] they realized that I was the same person,” he said. “For me to admit I was gay didn’t change anything, I was still Robbie.”

His message to Inuit struggling to accept their sexuality: stop being afraid to be yourself.

Watt knows that’s easier said than done, but he hopes that Inuit from across the country can find a safe space on his new Facebook page.

“I’m hoping it’s a forum to make people feel supported, like they have a voice,” he said.

You can find the LGBTQ Community in the Arctic group here.