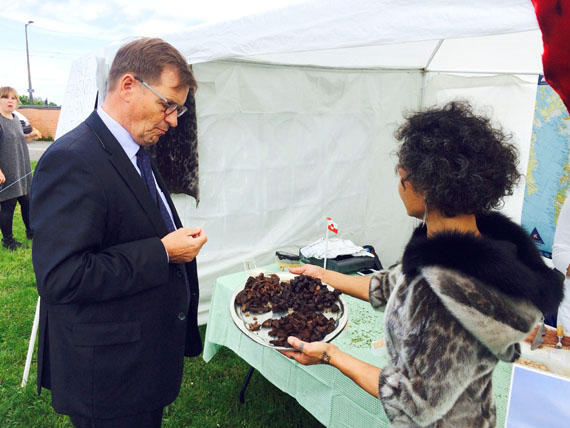 Aaju Peter of Iqaluit serves a plate of fried seal meat to Bendt Bendtsen, a Danish member of the European Parliament, at an event held May 19 in Strasbourg, France, the seat of the European Parliament. Inuit Sila stood at the main gate leading to the parliament for two days, serving seal meat to MEPs and entertaining them with music from a Greenlandic choir. (PHOTO COURTESY OF INUIT SILA)

On Oct. 1, members of the European Parliament will get a chance to sample seal meat at the Brussels launch of a new pan-Inuit organization.

Its goal: to defend and promote the right of Inuit seal hunters to market seal products within the European Union member states.

Those EU officials at the event will also be able to speak to Inuit from Canada and Greenland and “to see and feel their beautiful sealskin products,” a news release from Inuit Sila said.

Inuit Sila, which is based in Copenhagen, said it’s worked to improve conditions for Greenlandic seal hunters for the past three years.

But now the organization plans to expand its work to all Arctic nations.

“We must stand together in this one case. This applies to all communities in the Arctic, which are severely affected by 40 years of campaigns against seal hunting and now the EU’s discriminatory ban,” Aaju Peter, the Greenlandic-born Canadian seal activist, said in the release.

“Together we have a stronger voice internationally. On the whole, I believe that we must begin to orient ourselves more toward each other from east to west in the Arctic. If we are not united, no one will listen to us.”

The Inuit dispute with the EU dates to May 2009, when the European Parliament voted to ban the importation of seal products within EU member states, with a vaguely-defined exemption for seal products harvested by indigenous hunters.

Leif Fontaine, the former head of Greenland’s hunters and fishermen’s organization in Greenland — and spokesperson for Inuit Sila in Greenland, said there’s still much to do.

“We are worried that the EU continues to sharpen the seal ban. A ban that we see as discriminatory and that we believe should be abolished rather sooner than later.”

With the amendment of the seal ban, the European Parliament also stressed the need to re-establish consumer trust in Inuit sealskin and to conduct an impact assessment of the consequences of the ban.

Sila says it’s looking forward to this being carried out, because this offers an opportunity for the Inuit hunters to once again make a living from selling sealskin.

“We request the EU parliament and commission to remember the good will they have showed so far, as there is a long way to restore consumer trust to a pre-ban level,” Fontaine said.

There, a petition asks signatories to support a call to help “ensure the livelihood of the hunters and their families and the survival of the villages,” and “demand that the EU restore the Inuit hunter’s opportunity to export, either through the elimination of the ban or similar measures.”