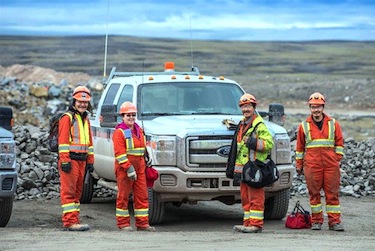 A group of Baffin-based workers stands near the site of Baffinland Iron Mines’ Mary River mine site about 160 km southwest of Pond Inlet. (PHOTO COURTESY OF BAFFINLAND)

Baffinland Iron Mines Corp. got what it wanted earlier this week when the federal government granted the mining company an exemption that will allow its Phase 2 shipping expansion proposal to go directly to the Nunavut Impact Review Board for an environmental review.

But the mining company, which operates the Mary River iron mine in North Baffin, was hesitant about celebrating that news, given the reaction from a number of organizations, who say the request should never have bypassed the regional land use plan.

In a July 15 release, Baffinland said the NIRB assessment process will provide an opportunity for all stakeholders to look at the company’s proposal, which includes the expansion of their iron ore shipping season to about 10 months of the year and an increase in ore production from 4.2 million metric tons to 12 million metric tons per year.

“The project approval process in Nunavut is demanding and thorough, as it should be,” said Baffinland CEO Tom Paddon.

“Baffinland’s continuing wish is that the project be given a fair and timely hearing. Proceeding to the environmental assessment process will ensure that occurs,” Paddon said.

The company goes on to add that its Mary River iron mine is currently delivering “significant employment and commercial benefits” to Nunavummiut, while an expanded shipping season with only strengthen those benefits.

Mary River, says Baffinland, is dependent on the mine growing to a level that sees greater mining, transportation and shipment of ore to its customers “on a reliable and consistent basis.”

The request and subsequent exemption stems from the Nunavut Planning Commission’s April decision to deny the mining company a positive land use conformity designation for changes they wanted to make to their mining operation.

The NPC also told Baffinland that, due to underfunding, they can’t likely handle an application to amend the North Baffin Regional Land Use Plan until 2016.