By LISA GREGOIRE AND SARAH ROGERS 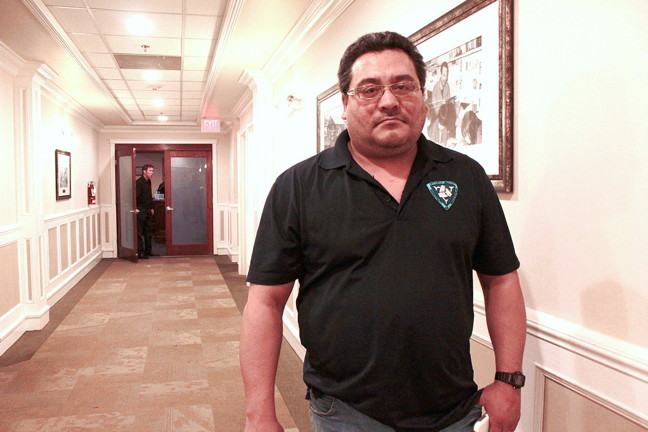 Stanley Adjuk, president of the Kivalliq Wildlife Board, said hunters and trappers groups in his region were caught off guard by the Government of Nunavut’s recent cabinet-approved decision to support potential industrial development in sensitive caribou areas. (PHOTO BY LISA GREGOIRE)

Hunter and trapper organizations from across the Kivalliq say they’re angry at the Government of Nunavut’s sudden decision to support potential mining activities on caribou calving grounds.

In a March 7 letter to the GN, the Kivalliq Wildlife Board said local organizations were surprised to hear Nunavut’s cabinet ministers had changed the government’s policy on caribou habitat.

Pinksen made an oral presentation at an NPC technical meeting on the Nunavut Draft Land Use Plan, but submitted nothing in writing, say those who attended.

And if you go to the NPC’s website to track the consultation record on the land use plan, there are no recent submissions from the GN’s environment department.

“The KWB believes the GN has made a very irresponsible decision,” KWB president Stanley Adjuk wrote March 7. “Mining in caribou calving grounds could have detrimental impacts on hunters in the Kivalliq region.”

But the organization said it’s equally disappointed in how the decision was made and that the GN doesn’t appear to have sought input from harvesting stakeholders.

“We were given no official notice that the GN was considering changing its position on mining in calving grounds,” the letter reads. “There was no discussion about the issue in the legislative assembly. And there was certainly no engagement with the public on this question.”

When approached at the NPC meetings, Adjuk said wildlife groups in the Kivalliq, who have been tirelessly gathering scientific and traditional knowledge for two years to support full protection of sensitive caribou grounds and water crossings, are disappointed, but unwilling to give up.

“I have no idea why [the GN] wants to go that route. I’m thinking they want mining, although we want to protect our caribou,” Adjuk told Nunatsiaq News.

“We’re clear about it. This is the wrong way. We’ll use all we have to try to protect [the caribou] and if that means we have to fight our own government, we will continue to fight.”

Adjuk has at least two allies in Nunavut’s legislature.

“Can the minister describe the current measures that are in place to protect the caribou herds from mining related exploration?” Mikkungwak asked Mike, in one of several questions to the minister.

Mike offered no details of the government’s position, and instead just repeated over and over that the GN supports “responsible development.”

Mike clarified later that he meant organizations such as the Nunavut Impact Review Board, which vets projects through an environmental impact assessment process.

When pressed later in question period by Sammurtok, Mike said “the government supports responsible development in calving areas and key access corridors and this will be on a case-by-case basis.”

When asked later, Mike confirmed to Nunatsiaq News that it was a cabinet decision to support potential development in sensitive caribou areas in the Kivalliq.

He said Nunavut needs development and that so long as the impact on caribou is mitigated by rules and requirements — set out by the NIRB, for instance — there’s no reason mining and sustainable caribou harvesting can’t co-exist.

“This measure is going to be subject to seasonal restrictions and corridors and all those things,” he said in an interview.

He said Nunavut’s land use plan is still in draft form and that “everyone is welcome to put in their ideas and recommendations.”

But he said the government is confident people support their position.

“I think pretty much most of Nunavut is happy with these kinds of recommendations we are putting forward and that we have support in those areas. I cannot speak for economic development but surely, Nunavut needs to develop in a responsible way.”

When asked whether he would appear at the NPC hearings to clarify the GN’s position on caribou management — as some participants have requested — Mike said, “no it’s a technical meeting. We don’t get involved in that.”

The Nunavut Planning Commission is hosting technical meetings on the land use plan from March 7 to March 10, with an agenda devoted to the territory’s caribou habitat and marine environments.

Kivalliq residents have repeatedly expressed tolerance for mining in the region so long as it doesn’t impact sensitive areas such as migratory routes, water crossings and seasonal places where female caribou give birth and nurture their young.

This is the NPC’s fourth technical meeting, held to address the more detailed questions of land use in Nunavut prior to a final public hearing.

But whether that final hearing ever goes forward is anybody’s guess.

The NPC has insisted that the federal government help to pay for that hearing which has an estimated cost of about $3.5 million.