Cargo-passenger service based out of Kitchener-Waterloo 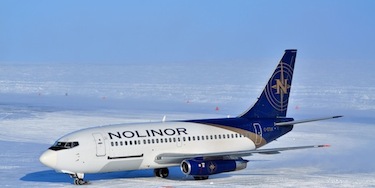 A Nolinor Boeing 737 prepares to offload cargo at a mineral exploration site after landing on an ice runway in Nunavut. (FILE PHOTO)

A new joint-venture alliance between Nolinor, a Quebec-based charter airline and Sarvaq Logistics, an expediting and freight firm at the Iqaluit International Airport, plans to run two flights a week from the airport at Kitchener-Waterloo, Ont. to northern Baffin Island.

Two Boeing 737s will fly to Nunavut with cargo and passengers to a mining project that multiple sources have identified as the Baffinland Iron Mines Corp.’s Mary River iron mine project.

But Dave Morgan, the director of charter operations at Nolinor, said he cannot release the name of the company yet due to contractual obligations.

But he said he’s looking forward to the first flight north on Sept. 16, which will carry cargo and 119 passengers

Nolinor’s flights will depart in the morning from the Kitchener-Waterloo airport and on their way up stop at Iqaluit, where Frobisher Bay Touchdown Services will provide refueling and other services.

If bad weather prevents the flights to and from the mine from taking off again, passengers will stay in Iqaluit, Morgan said.

Nolinor now has joint ventures across the North to take advantage of mining exploration and production: in the Kitikmeot region, where it recently established a base in Yellowknife with Kitikmeot Aviation, in the Kivalliq region with Sarliaq Holdings Ltd, where their joint venture provides transportation for the Meadowbank gold mine near Baker Lake, and in Nunavik, with Developpements Aputik.

“We want to grow across the Arctic,” Morgan said.

Nolinor’s efforts in working with local people has generated positive response and feedback, he said.

Many people he’s met in the North also welcome a new player, Morgan said, saying his company’s presence breaks what he called “the monopoly in Arctic aviation.”

The new flights could also open new charter opportunities for people traveling from the North.

Nolinor and one of its partners could, for example, offer flights from one of its northern destinations to Kitchener-Waterloo when the 737s (three now and another one set to arrive shortly) are not flying.

As well, members of the public could even “crowd-source” flights, Morgan suggested, by selling seats to a flight online, which has been done successfully in other places