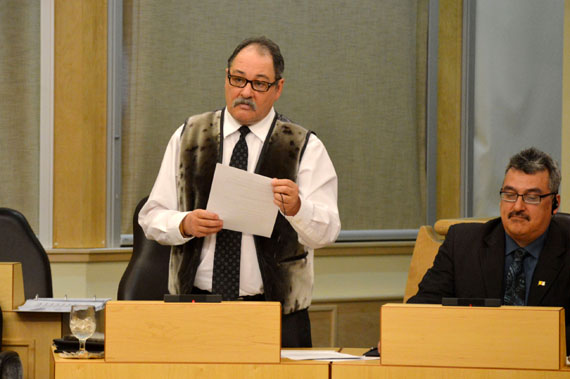 Tununiq MLA Joe Enook complained Feb. 27 that five of seven Department of Environment jobs are unfilled in Pond Inlet because of a staff housing shortage. (PHOTO BY STEVE DUCHARME)

Five of seven environment department positions in Pond Inlet have been vacant since at least October of last year, including a critical wildlife management position that’s been unfilled for the past two years, Savikataaq told Tununiq MLA Joe Enook, who requested an update from the minister.

“I’m sorry to say my update would still be the same, we haven’t filled any of the positions,” Savikataaq replied.

According to Enook, Savikataaq said during the legislature’s fall sitting that a shortage of staff housing in the community of roughly 1,500 had impacted the hiring process.

“We don’t have any priority over any other department in terms of housing allocation, so we just put our name in the [Nunavut Housing Corporation] queue and we do our best,” Savikataaq responded.

But Enook told Nunatsiaq News during a break that Pond Inlet probably has the housing units already—these just aren’t allocated to the right GN departments.

It’s a bureaucratic headache that’s complicated the hiring process in the community for decades, Enook alleges.

“We seem to have half a dozen to a dozen staff houses that sit there empty forever since 1999,” he said.

“If the houses are there, you’d think, rather than have them sit there forever, you’d think you would utilize them.”

As it stands, the existing misallocation creates housing surpluses in some departments, while others remain consistently deficient—at the expense of valuable employees.

“We had a teacher leave because he had shared accommodation for two years while there’s several houses sitting empty,” Enook said.

Savikataaq said his department is “putting the majority of our efforts” into finding a permanent hire for the management position, while the others will continue to be filled by casual employees as the search continues for indefinite employees.

“We are working hard so that the people of Pond Inlet can get the services that they need and require,” he said.

Meanwhile, North Baffin wildlife issues continue to pile up as development evolves over the creation of a national marine conservation area in Lancaster Sound, as well as a the growth of commercial and tourism shipping throughout the High Arctic.

“These are positions there to serve Qikiqtalungmiut,” Enook said.

“[The management position’s] been vacant for a couple years and that’s the person that oversees all of those communities.”